Close Friends/Comrades; both are deceased.

“I love her! She's bright and pretty.”
— Shinobu about Mitsuri

ShinoMitsu is the femslash ship between Mitsuri Kanroji and Shinobu Kocho from the Demon Slayer fandom.

Mitsuri and Shinobu are fellow Hashira, as well as being the only women who are such. The two bonded at some point after Shinobu's elder sister Kanae's death, and developed an extremely close friendship, to the point where they've stated that they love each other.

When the Hashira are arguing about whether Nezuko and Tanjiro should be allowed to live and remain in the Corps, Shinobu tells Sanemi quite crossly to not go to far when testing Nezuko's limits as she knew how he often gets carried away. This causes Mitsuri to blush, noting that Shinobu doesn't get outwardly angry very often, but thinks she's cute anyways. She makes the same remark when Shinobu is willing to take Tanjiro to the Butterfly Estate and care for him and his sister.

In the first light novel, Mitsuri is feeling down and Shinobu, noticing, offers to try and help her feel better. It turns out that Mitsuri felt guilt over joining the Demon Slayer Corps simply over her wanting to find a husband, so much so to the point where she refuses to eat. However, with coaxing from Shinobu, she's able to cheer up, and it's shown through the main series that she no longer feels guilt over her ambitions and who she is (which, presumably, happened largely due to Shinobu's friendship).

After Shinobu's death, Mitsuri was determined to fight even stronger and harder than the former had, as she had been younger than her.

Shinobu and Mitsuri, additionally, are shown to parallel each other: their personalities and the way they dress being some examples. A particularly notable one is that Shinobu wishes she wasn't so weak in order to protect those she loves, and Mitsuri wishes she wasn't so abnormally strong so people could see her feminine side and love her for who she is. Additionally, both women put up a sort of "mask" to hide their true selves; Shinobu acts calm and composed as opposed to her true angrier nature due to wanting to be the motherly figure her sister once was to the other girls at the Butterfly Estate, and Mitsuri feigns happiness and joy, when truly she is deeply insecure. The contrast is rather significant, as both points are very important to their characterizations. (It's also been stated that both help each other work through their respective shortcomings.)

ShinoMitsu is the most popular femslash ship inside the community, but GiyuShino and ObaMitsu are more popular with the fanbase overall. It stays nonetheless an extremely favored ship for fans who enjoy femslash content, due to the lack of female characters in Demon Slayer (and among the Hashira in particular). Fans also enjoy the ship for their contrasting characterizations, and the care and love that they express for one one another.

When it comes to fan fiction, modern AUs are very popular, accounting for about a fifth of the total amount of works on AO3 (around 200). Some fans also like to pair ships like SabiGiyuu or SaneGiyuu alongside them in their works. 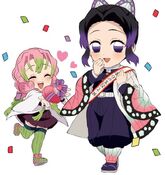