Childhood Friends to Enemies to Lovers

Shirachuu is the slash ship between Chūya Nakahara and Buichirou Shirase from the Bungou Stray Dogs fandom.

After escaping from a government labratory where he was being experimented on at seven years old, Chūya was found and rescued by Shirase. Shirase was a member of a group of orphans called The sheep who relied on each other for protection against threats such as criminal organizations and labor trafficking. The Sheep were hiding under a bridge where they often went to drink when Chūya appeared on the verge of starvation. He saw a piece of bread that Shirase was holding and asked what it was. Shirase offered it to him but Chūya promptly collapsed. While the rest of the Sheep didn't want to take Chūya in, Shirase advocated to allow him to join the group and save them.

With Chūya's help, the Sheep established a strong territory and even grew to rival the Port Mafia. Because of this, Chūya gained the moniker "the King of the Sheep." Shirase and the rest of The Sheep relied heavily on Chūya to protect them because of the strength of his ability, which resulted in him being somewhat alienated from them.

During the fifteen arc, exploring the events that led Chūya to join the Port Mafia, Shirase comes looking for Chūya in an arcade where he is accompanied by Osamu Dazai. Shirase hopes that Chūya will retaliate against the Port Mafia for taking eight of The Sheep's members hostage, but Chūya refuses to do so because he is busy trying to look into his true origins. He tells Shirase that he can't take revenge on the Port Mafia because he has a bet with Dazai that he can't lose, leading Shirase to believe that Chūya plans to betray The Sheep in exchange for a reward.

Shirase meets Chūya later at the edge of a cliff where Chūya is visiting the grave of Arthur Rimbaud. He approaches Chūya under the pretense that he has an idea for how The Sheep can deal with the problem of Chūya not being able to do what he wants because of them. In a surprise attack, he stabs Chūya in the back with a blade coated in rat poison, explaining that he wouldn't have to do it this way if Chūya wasn't so powerful. He has to kill Chūya because if he were to join the Port Mafia, The Sheep would be massacred. He reveals that The Sheep are now allied with the GSS, a mercernary group that they feel they can actually rely on.

Chūya escapes but runs into Dazai once again who offers the following deal: he will spare the lives of The Sheep, who the mafia intended to kill along with the GSS, if Chūya agrees to join the Port Mafia.

A year later, the Port Mafia has disbanded The Sheep and spread the members across the country. The only Sheep member remaining in Yokohama is Shirase, who they are keeping under surveilance in order to prevent Chūya from betraying the Mafia. When Paul Verlaine appears to be threatening those who are keeping Chūya in the Port Mafia, Chūya immediently jumps to Shirase's defense in case he is targeted.

Chūya and Adam Frankenstein go to speak to him in the automobile factory where he is working. Still under the impression that Chūya betrayed The Sheep a year prior, Shirase throws a vase at Chūya's head and is reluctent to speak with him. Chūya asks him to help him get the jump on Verlaine, but Shirase does not take too kindly to being used as bate. Chūya says that he doesn't have a choice and if he doesnt cooperate he will be killed. Shirase still refuses and escapes on his motorbike, but is shortly after arrested for stockpiling weapons in order to rebuild The Sheep. Chūya and Adam follow him to the Police Station.

On breaking Shirase out of his cell, Adam explains to him the truth of what happened a year ago, something that prompts both guilt and defensiveness in Shirase. As Adam and Shirase are leaving, they are attacked by Verlaine, who asks Shirase about Chūya's past. It seems as if Shirase is doomed to die at Verlaine's hand, but Chūya appears at the last second and rescues him.

Still scared for his life, Shirase insists on remaining with Chūya and Adam while they continue with their investigation so that they can protect him. He accompanies them to a lab where he, Adam, and Chūya are seperated when Professor N takes Chūya off on his own.

While at the lab, Shirase had been poisoned and after rescuing him, Adam stowed him in a locker to get him out of the way. On waking up and hearing alarms, Shirase decided to try to flee the lab, but not without looting the lab first. He briefly considers the fact that Chūya might be in danger, but then thinks that he does not care.

While looking for things to steal, he comes upon Chūya fighting a skeleton. It is the skeleton of his clone that had been being kept at the lab. On seeing Chūya in danger, Shirase yells his name and rushes forward before stopping himself. If he goes there, he thinks, he will die. He thinks that he has lived as long as he had by acting wisely. Chūya had always been strong and had been the one to fight, but on seeing him in so much pain and in danger it finally dawns upon Shirase that Chūya is really just a kid his age. Because of this realization, Shirase throws himself into the battle and saves Chūya's life.

As Chūya helps him to his feet at the end, he almost apologizes, but instead says, "You look freakin' filthy."

At the end of Stormbringer, Shirase departs for London to make a name for himself after having a taste of adventure. Chūya meets him at the port to see him off. Shirase extends in invitation to join the organization he plans to build once he builds it up to be bigger than the Port Mafia. Chūya just laughs in disbelief and says that he looks forward to it. Before saying goodbye, they do a secret handshake that was usually reserved for friends in the Sheep.

Shirachuu is not as popular as many other ships like Soukoku. This is likely because Shirase is generally disliked after his actions in the Fifteen arc. The ship is growing after the release of Stormbringer, though. Shirase has been typically used in fics for other ships, mostly Soukoku, as a romantic rival to Dazai early in the story. There are only a few fics depicting exclusively the relationship between him and Chūya. The ones that do exist focus primarily on his guilt about the stabbing incident and rebuilding their relationship from there or past romantic encounters in The Sheep. 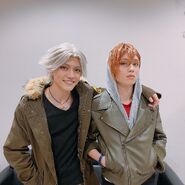