Shiromami is the het ship between Rantaro Amami and Tsumugi Shirogane from the Danganronpa fandom.

The two have only two interactions together, one of which happens off-screen. However, Tsumugi grows a strong hatred for Rantaro, calling him an edgy normie, a playboy, as well calling him as well one of 'those types' (assuming Rantaro is homosexual) and feels disgusted by his actions. Meanwhile, Rantaro's opinion of Tsumugi is unknown.

In the nails painting scene, Tsumugi watched the two of her friends, Kaede and Rantaro, having a scene together of Rantaro painting Kaede's nails and Tsumugi watched silently while becoming disgusted and tried to hide her hatred from Rantaro trying to interrupt them by offering to paint Kaede's nails. Tsumugi said that Rantaro should have blown up forever since he was being a total normie.

It was later revealed in Chapter 6 that Tsumugi was the one who killed Rantaro and framed Kaede for the incident. Tsumugi didn't want Rantaro to discover the secret and exposed of her being the Mastermind. She was aware that Rantaro, guided by his talent would be in her way and cause trouble along with Kaede who was able to unify everyone's heart, so she decided to kill both of them in the same case. Tsumugi stopped Rantaro by killing him from behind and hid the ball that Kaede rolled down the vent.

The ship sailed with the nail painting scene with the two and Kaede Akamatsu. Some fans interpreted Tsumugi's annoyance with Rantaro as her being jealous of the attention he gives Kaede in the scene. With the reveal that Tsumugi was Rantaro's actual killer, a lot of shippers abandoned the ship. However, it was still popular with those who tend to ship victim-killer duos. In certain scenarios, it resulted from "Pair the Spares" reasoning.

Fan arts often tend to reference Tsumugi's crime of killing Rantaro. Some also tend to show the two together as a sort of accomplices, referencing Rantaro's role as a major red herring. 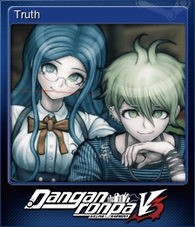 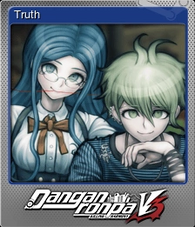