ShishiCamie is the het ship between Seiji Shishikura and Camie Utsushimi from the My Hero Academia fandom.

Camie and Seiji don't appear to get along very well with one another. While Seiji is all about dignity and obligation, Camie is extremely carefree. Seiji has been noticed speaking in a strict and formal manner when he appears while Camie has used slang while talking to her peers. Camie was friendly and upbeat when she met the other students trying to get their provisional license. Seiji, on the other hand, was hostile and didn't seem to want anything to do with them. Seiji seems to believe that Camie is an idiot, but Camie doesn't seem to mind and acts so nonchalantly about it that it drives Seiji mad.

From that paragraph, Seiji was worried sick about Camie after the whole incident with Toga. If we're going to compare their relationship to a father and his daughter, of course the father (Seiji) is gonna be mad at his daughter (Camie) because she doesn't really care about the dangerous accident (Toga). Even though he has scolded her, Camie hasn't tried to insult him back. She seems to be used to it, and continues to act casually even after he expresses his irritation with her. Seiji was visibly frustrated when Camie apparently didn't care about the incident; she had shrugged it off even when they were concerned for her.

Both students failed the provisional license exam—-Seiji because he was defeated by Denki and Camie because she herself didn’t participate (Toga took her place). They both attended the training classes to earn their licenses. While Seiji might believe that he is better than Camie this may imply that the two are closer to the same level. They are classmates enrolled in Shiketsu High School. Seiji imbodies exactly what the school teaches. He is dignified and greatlyvalues being a hero. Camie is more of a “normal teenager” type. She is much more relaxed and that made her a target for Shishikura’s sharp reprimands.

In My Hero One’s Justice 2, one of Camie’s drama dialogue mentioned that Seiji “gave a rare apology” to her. He personally apologized to her off screen!! It's a pleasant, heart warming, even, thought that the serious and ever condescending Seji could ever show an emotion other than exasperation towards one of his classmates--that is, sincerity. That was the closest Seiji ever got to actually acting like a friend to one of his peers. Camie obviously needs someone to scold her for her careless actions, so that's why, we need someone like Seiji to make Camie more aware and care about her situation, especially with the LOV's sudden attempts at infiltration.

ShishiCamie is one of the rarepair ships within the My Hero Academia fandom. Not many know this ship exists. This ship began when Seiji scolded Camie about Toga, shown that Seiji cares for her. However they don’t have enough screen time.

The ship portrays like how IidaCamie do. A strict person who fell in love with a laid back girl, Camie often as someone who asks dumb questions and Seiji is the ones who answer that with a short sarcastic answers, and Camie just laugh it off. And it portrays how weird and funny their flirt ways like the 'Marry a nice man or someone like Seiji (Felix)?' on YouTube. the only difference from IidaCamie is, Seiji is a bit of tsundere.

Due to the two being so got so little screen time, ShishiCamie is not particularly popular within the My Hero Academia fanbase, and is thus listed as a “rare-pair”. However, like all rare-pairs do, it does have a decent following. Meanwhile Seiji does not have too large of a shipping community, and thus, lacks rival ships on his part. When it comes to Camie, she kinda get more rival ships. BakuCamie is her ship that got the largest fan. But for people who ship the Shiketsu's with each other, the rival ships are InaCamie and InaSei; while InaSeijiCamie allows both Seiji and Camie to be shipped with Inasa in a polyship.

Seiji – “We were talking about you, you idiot!”
Camie – “For real? Jeez, that's sweet!”
— Seiji and Camie after Camie asked what are Seiji, their teacher and All Might talking about, that even All Might is there 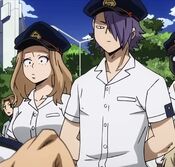 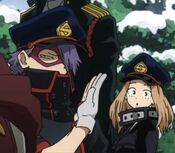 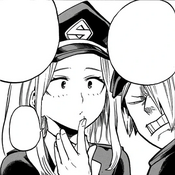 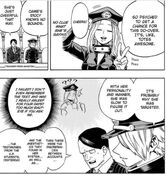 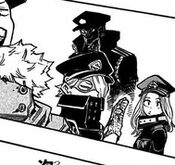 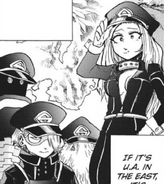 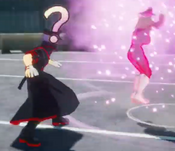 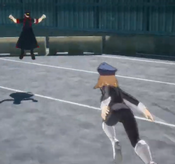 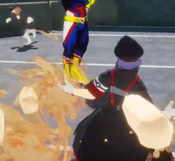 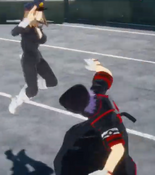 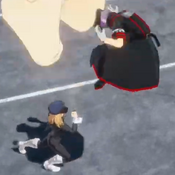 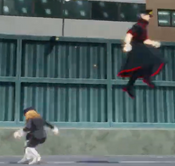