Shovel Knight is the slash ship between Oscar Pine and Jaune Arc from the RWBY fandom.

Jaune and Oscar first meet in "Welcome to Haven", in volume 5. Jaune initially thinks that Oscar is a random stranger and asks if he needs help. He then becomes extremely wary alongside Ren and Nora when Oscar asks about Ruby. When Oscar then reveals himself as the reincarnation of Professor Ozpin, Jaune is stunned into silence. In "Lighting the Fire", Jaune and Nora watch Oscar spar with Ruby. Then when Jaune laments his lack of his own Semblance, Ruby brings Oscar up to him, who is also without a Semblance, and points out that they are not so different.

In volume 6 chapter 8, Jaune becomes angry and paranoid and proceeds to bash Oscar against a wall. He then angrily yells that he thinks Ozpin is pretending to be Oscar, and that they can't trust him and he's a liar. After Ruby snaps him out of it he lets Oscar go, and leaves to go upstairs to his room. In chapter 9, he feels guilty about the way he acted and feels uncertain about what he's going to say to him when they find him. Afterwards, when he does find Oscar, he apologizes to him for his actions and the two easily make up.

In volumes 7 and 8, Jaune and Oscar start to develop a more friendly relationship. In "Sparks", they train with Ren and Nora against Team FNKI, and manage to win although just barely. In "A Night Off", Jaune shyly asks if anyone wants to go with him and Oscar to the movies, and Weiss agrees much to the boys' surprise. In "Gravity", Jaune agrees to pick up Oscar from Atlas Academy with Ren and Nora, but they then find out that Oscar is missing and Jaune asks out loud where he could possibly be. In "With Friends Like These" they run into Neopolitan disguised as Oscar and rush to protect him once her illusion is broken. In "The Enemy of Trust" Jaune rushes to shield Oscar from an attack from Neo and when they separate he frantically shouts out Oscar's name. After they escape to the academy training room, Jaune tells a very upset Oscar not to blame himself for Neo getting the Lamp.

Shovel knight is a rare pair within the RWBY fandom. This is mainly because the two never started talking to each other until recent volumes. Many people ship them because they like the similarities between the two. Also the two have started hanging out with each other and becoming closer friends as the volumes have gone on. It has a small fanbase on tumblr. 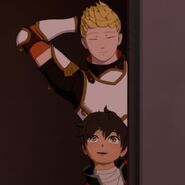 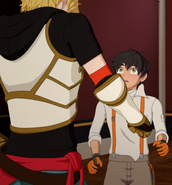