Skephalo is the slash ship between Skeppy and BadBoyHalo from the YouTube fandom.

BadBoyHalo is seen nearly in all of Skeppy's videos. At first, he is the main victim of his trolling. But, as his content shifted for trapping "kids" and making them do challenges, he is seen more as a host for these events.

In WHAT HAPPENS WHEN YOU GET SCREENSHARED... , he pranks Bad by putting random things on his screen, like crocs, videos with BadBoyHalo, and weird Google searches. But, most notably, he puts random Skephalo fanart as his PC background. When Bad asks him about it, he says that it was his "favorite pictures" as a joke. When trying to find a different picture for his background, he searches up "BadBoyHalo thick." Eventually, he does change his background to a warped version of BadBoyHalo's face in the Wisdom Teeth video.

In THE SKEPPY QUIZ video, he answered his opinion on shipping on a quiz with the option that shipping is ‘okay, but some ships are super weird’.

In So I Trapped 100 Kids in the SOLAR SYSTEM..., Skeppy said, "Sometimes I wonder why we were ever in a relationship." And when BadBoyHalo asks him what he just said, he quickly changes the subject.

In Minecraft, But My Friend Has to Carry Me..., at the beginning of the video, Skeppy says "What's up guys, and today I'm riding BadBoyHalo." He starts laughing afterwards.

In Skeppy vs BadBoyHalo MOST SECRET House Battle! - Minecraft , Skeppy puts a sign down that says "to spy on my best bald boy friend". He immediately removes and freaks out a bit, acting embarrassed.

In BadBoyHalo Says "YES" To EVERYTHING I Say..., Skeppy tells Bad to type in the chat "I think Skeppy is really cute". At first he refuses, but Skeppy asks if he wants to and Bad says he does. Skeppy also asks him if he wants to place down two beds next to each other, and Bad does, putting their heads on the end of each bed.

In I Broke Every Love Relationship in the Dream SMP, Quackity invited Karl, Sapnap, BadBoyHalo, and Skeppy to his "couples therapy".

In livestreams with BadBoyHalo in the past, he jokingly flirts with him from time to time. Here are some examples:

He was trolling the fans there because, in another livestream, he said that it was ok for people to write fanfictions of him and Skeppy because he doesn't read them.

The two are canonically best friends, like their real-life counterparts. Skeppy and Bad built a giant quartz mansion together over the ruins of Skeppy's old house. He also joined the Badlands because of Bad's involvement in the faction.

Earlier in the SMP, they also built a private vacation home named 'Big Daddy Island' that only Bad and Skeppy are allowed to live on. They have a shared bed further out in the ocean and a statue of Bad that Skeppy created as a surprise present. The sign on the front door originally said "BadBoyHalo and Skeppy's House" but was later changed to "Bones and Skeppy's House" after the Egg Room confrontation.

While Bad was affected by the Egg, Skeppy seemingly sacrificed himself to enclose the Egg in obsidian. Skeppy was eventually freed, but after the long-term exposure to the Egg his normally diamond skin turns into a corrupted red. Bad attempted to help Skeppy turn back to his normal self, but they were all ignored and he stayed unaffected. Skeppy expressed his "euphoric" desire to only be with the Egg; he moved out of the shared mansion as well and built his own small hut.

On April 18th, Bad was in the Egg Room preparing for the Final Banquet. He noticed Skeppy on top of the Egg, and tried to coax him down but Skeppy refused. Bad accidentally pushes Skeppy into lava, killing him. Since Bad only loses lives when Skeppy does, Bad also lost one of his canon lives.

One tweet from BadBoyHalo reads: "What's the hottest thing you muffins have ever eaten?" Skeppy replied with "You", but later deleted the reply.

Bad retweeted the Skephalo flag calling it their "victory flag" when they were playing in Minecraft Monday. He has also tweeted an animation of him and Skeppy kissing, captioning it "Gartic phone is so much fun.... I hope you guys enjoyed the stream xD".

Both Skeppy and Bad have tweeted very similar things talking about each other, with Skeppy tweeting, " Badboyhalo is my best friend. He's been there for me countless times. Whenever I need someone to talk to he's always there for me. and he's so funny, caring, and trustworthy. I would not trade him for anything. I love you @SaintsofGames," and Bad tweeting, "Skeppy is my best friend. Even when we don't see eye to eye he is still so understanding. He's always there when I need someone to talk to. He makes me laugh and cheers me up when I'm down. I hope everyone can find someone like Skeppy in their life. I love you @skeppyextra"

Spifey, Velvet and Vurb actively tweet about Skephalo, on replies and such.

People put a6d as their captain for the ship because back then, he frequently talked about Bad and Skeppy being in a relationship and even read some Skephalo fanfictions on livestreams. More recently, Velvet, Puffy, and Tommy have started publicly supporting/mentioning the ship. As Skeppy and Bad argue over little things, fans joke that they act like a married couple.

As there is some controversy with shipping real people, some fans of Skephalo ship them purely as friends. Since Skeppy has brought up his regret for saying certain things in the past, this caused a few people to witch-hunt people who shipped Skephalo. 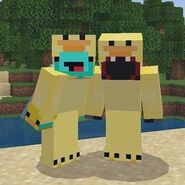 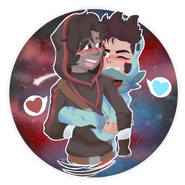