Shipping Wiki
Register
Don't have an account?
Sign In
Advertisement
in: Ships, Ships/Het, The Owl House/Ships,
and 5 more

Sking is the het ship between Skara and King from The Owl House fandom.

In the episode "Covention", King watches the duel and sees someone cheering on Amity, he gets angry as he tells them to cheer for Luz making him trip over his own scarf. All the accessories he was wearing on his head flew through the audience as he was falling down, Skara sees King bouncing to the arena and only one of the accessories falls on someone, Skara's head perfectly.

In "Once Upon a Swap", Luz, Eda and King swap bodies with each other, King stays in Luz's body and he gets to know Skara more when the teenagers decide to hang out with him. Same for Skara, but she doesn't actually know it was King the whole time. Then Boscha challenges King, Skara tries to warn him and tell that it's not necessary for him to accept the race, but King doesn't listen. In the race, Skara is on King's side.

In "Sense and Insensitivity", King becomes an author behind Luz. Skara was one of his fans. When the books were already available, Skara, Amelia and some other fans ran desperately to get their book. While everyone was gone, Skara returns to grab King's cardboard, she kisses it on the nose and runs away with it.

Sking gained a following after "Once Upon a Swap", where King and Skara show that they can be good friends as Luz, and "Sense and Insensitivity" where it shows that King is Skara's celebrity crush from when he became a temporally famous author. While Sking is one of the ships that most people don't like it, for those fans who support it, find it really interesting and cute, expecting some big chemistry between the two, making it a het ship than a friendship. And looking over the fact that Skara and her Grom Date doesn't interact more after "Enchanting Grom Fright", pulls Sking even forward, like she broke up with him. That is why fans of the ship are hoping for season two to have more Sking-like moments.

Some of the ship's fanart has Skara with King when he was placed in Luz's body to reference their shared time together in "Once Upon a Swap", along with having Skara be taken in by King's small adorable appearance like most people are around him. Even though King hates being treated like a doll or pet, Sking fans see him having Skara as an exception once they get to know each other more and more. Sking fans are also hoping that Skara will become one of Luz's new friends through King, along with having a little joke of King making Skara his queen.

While the ship doesn't have a large fanbase on fan supporting website like AO3, it does have a following on Reddit and Wattpad currently has one known fanfic on the ship. 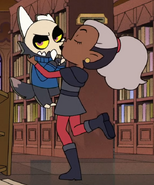