Once Upon A Time
Sleeping Beauty
Mulan

Sleeping Warrior is the femslash ship between Aurora and Mulan from the Once Upon A Time, Sleeping Beauty and Mulan fandoms.

Mulan joins Philip as he rides to the castle where Aurora is in a sleeping curse. Before he kisses her awake, he tells Mulan that they don't tell Aurora everything, at least not right away. Mulan agrees, and Philip then wakes her. Mulan leaves the couple to be reunited when they're suddenly attached by a creature before it flies away. Mulan says it was a wraith, and Aurora asks who she is. Mulan then removes her helmet and Aurora is surprised to find that she's a girl. Philip says that Mulan has been a great help to him, but Aurora starts to become jealous. Mulan says that they were lucky to avoid the wraith's mark, but they need to move.

On their journey Mulan says that they should stop since the light is keeping the Wraith away. Aurora can't believe that, but Mulan says that the wraith is looking for something to mark. Their best bet is to be still till night passes, and Philip agrees with her.

While Aurora waits in the tent and Mulan sets up the fire, the sound of the wraith rings out. Aurora exits and asks where Philip is. Mulan assumed that he was with her, but Aurora says that he told her he was making a fire. Mulan says she's doing that, and Aurora says that she can see that. Mulan realizes that Philip was marked, and starts to leave. Aurora asks where she's going, and Mulan says that she needs to stop him. He's sacrificing himself for Aurora, and Aurora says he's doing it for both of them. Aurora wants to come with but Mulan says she'll only slow her down. Aurora then chases after her.

Mulan is tracking, when Aurora shows up with one of the horses, insisting on coming with. Mulan says she needs to stay where she is, but Aurora wasn't asking for permission. Mulan says that she needs to honor Philips wishes by keeping Aurora safe, but Aurora says that she never asks him to. Mulan says that he does everything for Aurora, including dying. Love is a sacrifice that Aurora doesn't understand. Aurora won't let him face it alone, but Mulan says that his best chance is with her. Aurora assumes that Mulan is in love with Philip, but Mulan denies this. Aurora doesn't believe her, but their interrupted by the sounds of the wraith.

The two get to Philip who tells them that he has to sacrifice himself. Mulan tries to have him give her the mark, but Philip won't. He then dies as the two are forced to watch.

They take his body back to the palace, and lay him in the same place that Aurora was left in the sleeping curse. Mulan asks how Aurora originally got to the palace in her cursed state, but Aurora just says that Mulan isn't the only one who knows about sacrifice. Mulan then gives her the wraiths necklace, which Aurora thanks her for. She tells her that they need to leave since it's not safe, but Aurora says that the wraith is gone. Mulan then tells her about how they were all cursed, but don't know how their corner of the Enchanted Forest was untouched by it. The land is now ravaged with worse creatures, and now there is only a safe haven for them. She says they have to go there, when they hear a noise from the rubble where the Wraith appeared. Mulan tells Aurora to stay back, and the two find Snow and Emma in the rubble.

Sleeping Warrior is one of the well loved femslash ships within the Once Upon A Time fandom. Despite how things ended between them, there have been fans who have Aurora having the same feeling for Mulan and returns them, before or after Mulan confesses her love for the princess.

While the ship is commonly focused on OUaT's version of the two, there are fans who use ship and its commonly used title with Disney's versions of them within the Disney Princess crossover ships of the Disney fandom, since the ABC television series has its own versions of the Disney characters and has a few traits from its series; and it being the live-action show that helped to trigger the ship or had helped to make it popular in both fandoms. As well as a few fans recreating the OUaT fandom side of the ship within the Disney fandom side of it. A reawakened sleeping princess who meets and befriends a female warrior who became close with each other. There have even been those who feature the two as their other cameo counterparts in canon Disney crossovers and draw from universes, like Kingdom Hearts (where they are two of the first seven Princesses of Hearts), Sofia the First and the Wreck-It Ralph sequel film, Ralph Breaks the Interest, that sometimes has a few Disney fans place Mulan and Aurora in the modern, style clothes that the netizen versions of them are seen wearing.

On AO3, the OUaT side of the ship has over 319 fanfics while the Disney side of it has 7. 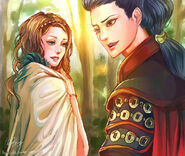 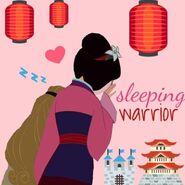 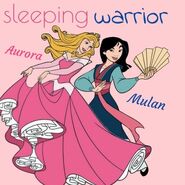