• Because You Were Nice to Me
• Opposites Attract

Snap Shot is the femslash ship between Mahiru Koizumi and Mikan Tsumiki from the Danganronpa fandom.

During their time at Hope's Peak during the prequel anime, Danganronpa 3: Despair Arc, it is shown that Mahiru is friends with a number of the girls in her class, including Mikan, stated to be one of her 'best friends.' She is one of the only students to call Mikan by her first name in the original Japanese version. In addition, Mikan and Mahiru are notably two of the very few students who attended class regularly before the arrival of teacher Chisa Yukizome.

Later, after Mikan is scolded for being late by Hiyoko Saionji, Mahiru takes a picture of the two of them and Ibuki Mioda in the hopes of lifting her spirits.

When Chiaki Nanami brought her video games to the class, Mikan and Mahiru are shown playing together, alongside Sonia and Chiaki herself.

During Danganronpa 2: Goodbye Despair, Mahiru is the only student to assist and defend Mikan after her tumble into an awkward, revealing pose. The photographer gladly helps the nurse up, and defends her from the lewdness of their fellow students. Mahiru is very gentle with Mikan, and expresses concern for her 'skill' of falling over into such exposing poses. It is Mahiru who tends to and cheers up Mikan after these incidents, warning her to be more careful next time.

As shown in the Twilight Syndrome Murder Case game, Mahiru defended Mikan after Hiyoko insulted her cowardliness towards the body they discovered.

Due to the Twilight Syndrome Murder Case motive, Mikan was one of the girls invited by Mahiru to the beach house. However, the former never showed up, attending Sonia's girls-only swimming trip instead. Because of this, Mahiru was able to be murdered. Mikan shows heavy grief over Mahiru's death, going so far as to blame herself for her failure to attend the meeting.

Awakening from the Neo World Program, Mahiru and Mikan are seen in the final moments of Hope Arc, standing together on the boat. Mikan had tripped into another awkward pose as Mahiru, Ibuki and Hiyoko continued to stand over her. Mahiru is seen later on striking up a conversation with her.

The ship sailed due to the numerous times Mahiru is seen defending Mikan from her bully, and the kindness the she seems to give to Mikan. It was only fueled by the later portrayals of their friendship in Danganronpa 3. Fans seem to support this ship due to Mahiru's ability to stand up for and protect Mikan.

While this ship is often overshadowed by more popular ships, such as Soapies for Mahiru and Band Aid for Mikan, there are some fans who like them all. 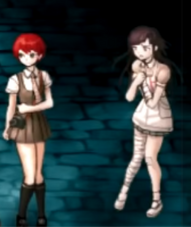