Snerah is the het ship between Snow Villiers and Serah Farron from the Final Fantasy fandom.

Serah was planning to attend the university in Eden when she fell in love with Snow during summer vacation, much to Lightning's dismay. From a young age, the local landmark, the Pulse Vestige, caught her attention and made Serah interested in studying history. One day, Serah visits the Vestige and finds a door leading inside and ventures into the ruins, where she is chosen by the Pulse fal'Cie Anima that was entombed within.

Serah is branded a l'Cie and dreams of transforming into Ragnarok and destroying Cocoon, but does not realize it is her Focus. She wakes up outside of the Vestige and notices the l'Cie brand on her arm. She tries to rub it off but, affected by her fear, the brand evolves and Serah walks off crying. Four days later, Serah tells Snow she has been branded a Pulse l'Cie and tries to break up, but Snow refuses to abandon her and offers to aid in figuring out her Focus.

Three days later, while out shopping for Lightning's birthday present with Serah, Snow slips away to buy engagement necklaces: two metal sculptures of Cocoon, under the premise of giving Serah "the whole world." During the annual Bodhum fireworks display the night after, Snow proposes to Serah and she accepts. The next day, Lightning's 21st birthday, Serah reveals to her sister she has become a Pulse l'Cie and has accepted Snow's marriage proposal. Thinking she is joking, Lightning shuts her out, but Snow is determined to help Serah alone.

On Lightning's birthday the following day, Serah and Snow tell her about Serah becoming a l'Cie and their engagement, but Lightning believes Serah is lying as an excuse to marry Snow. Serah and Snow attempt to seek the council of the fal'Cie in the Vestige, but since PSICOM discovered the fal'Cie the night before, the town has been quarantined and the Vestige is off-limits. While she and Snow escape PSICOM on an airbike, Serah jumps onto a ledge on the Vestige and becomes trapped by liquid metal tendrils that pull her into the Vestige as the fal'Cie's prisoner.

Two days later PSICOM Purges the people in Bodhum, deeming the civilians "contaminated" with exposure to a Pulse fal'Cie. The Vestige is taken to the Hanging Edge with the fal'Cie and Serah still inside. Leading Snow and his team, NORA, to engage PSICOM as a resistance force. Snow makes his way to Anima's Throne and finds Lightning and Sazh already there, along with Serah. Serah asks Lightning to save Cocoon and crystallizes, a tear-shaped crystal falling from her grasp into Snow's hand. This bewilders the group, as turning into crystal means a l'Cie has completed their Focus. Snow remains optimistic, as the legends state l'Cie who complete their Focus gain eternal life, but Lightning believes Serah to be dead. Snow begs Anima to return Serah, offering to become a l'Cie in her stead. Lightning and Sazh, however, engage in combat with Anima, Snow joins their plight only to be branded a l'Cie along with everyone else. As the PSICOM blasts the Vestige apart it releases an energy wave that destroys the Hanging Edge and falls down to Lake Bresha, crystallizing it on impact.

Snow awakens with the rest of the group in Lake Bresha, unscathed, believing Serah had kept them from harm. They try to discern their Focus from a hazy vision they shared, but only recognize the legendary beast Ragnarok is somehow involved. While the others believe their Focus is to destroy Cocoon, Snow believes it is to save it as Serah had asked.

Now enemies of the state, they evade pursuing PSICOM troops by crossing the crystallized lake when they come across Serah's crystallized form lodged in a formation. While the others keep moving to evade the army, Snow stays to dig Serah's crystal out.

In the end of Final Fantasy XIII, Snow is reunited with Serah and runs towards her, immediately picking her up in his arms and spinning her around before embracing her. After their greeting is through, they head over to Lightning, who hugs her sister and tries to apologize, only for Snow to cut in saying that they have a wedding to plan, and then promises Lightning that he will make Serah happy.

Snerah is one of the bigger ships among the XIII fandom, due to it's cannon status and the interactions between the two. Although XIII-2's decision to star Serah with Noel ended up creating some ship discourse, their popularity didn't waver, and the reaction to them reuniting in Lightning Returns was overall positive. And to this day content continues to be produced.

Snow and Serah's relationship was one of the reasons fans were upset at the ending of the trilogy, as the couple never had their wedding, and it's a hope among them that one day they will do something for it, such as aniversary art.

Snow and Serah find each other in Final Fantasy XIII-2

Snow and Serah at the end of Lightning Returns 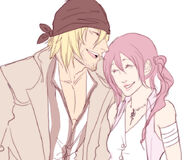