Snowfall is the femslash ship between Winter Schnee and Cinder Fall from the RWBY fandom.

Winter and Cinder first officially meet in (Volume 7 Chapter 12 "With Friends Like These"). She almost blasts Winter with a fireball before Winter quickly moves out of the way. They both immediately hold each other in low regard, with Cinder referring to both Winter and Penny as Ironwood's puppets. She then begins to fight Cinder after she refuses to step aside in the next episode.

During their fight Cinder begins a rant towards Winter saying "You atlas elite are all the same!". "You think hoarding power means you'll have it forever, but it just makes the rest of us hungrier". She then proceeds to kick Winter away and says "And I refuse to starve". Later during the fight outside Both Winter and Penny manage to knock Cinder off her game long enough to disorient her. Cinder then manages a strike at Winter that completely knocks her aura out and causes her to fall out of the sky.

Later when Cinder sees Penny with a dying Fria she yells out "she's mine!" and tries to reach her with her shadow arm. This doesn't work as right when it's about to reach Penny, Winter appears and manages to slash it off. This causes Cinder a great deal of pain as the shadow arm regrows itself and she cries out in agony. She then takes out her anger and growing frustration out on Winter as she violently and ruthlessly fights her. At one point she manages to cut Winter's arm and exhausting her so much to the point where she eventually collapses on the floor completely overwhelmed by Cinder's malice and strength. Then when Cinder is about to kill Winter, Penny emerges as the new winter maiden. Cinder then flees once she sees Ruby Rose show up.

They then meet again in the finale of Volume 8 (Chapter 14, "The Final Word") after the Winter Maiden's power is passed onto Winter.

Enraged at the Maiden's power having escaped her again, Cinder conjures a flaming sword and attacks Jaune, breaking Crocea Mors and demanding to know where they have gone. The answer comes almost immediately as Winter, floating above them, hits Cinder in the back with a bolt of magic, enraging her further.

The two Maidens rocket toward each other, colliding with such force that the impact generates an explosion. The first two times time they lock blades, Winter holds the initiative, forcing Cinder back and firing more magic at her. After several more clashes, they lock blades again. This time Cinder tries to push Winter back, but Winter flies up before she can, hitting the Fall Maiden with another bolt of magic and throwing her backward. She uses her Semblance to summon a flock of small Nevermores, which fly toward Cinder. Cinder conjures many red-hot glass blades and launches them at the Nevermores, destroying several, but the rest get through and swarm around her, attacking from every side. Infuriated, Cinder generates plumes of fire around herself, incinerating the Summons.

As Weiss and Jaune stagger toward the exit portal, Cinder and Winter clash several more times. Finally, Winter makes a lunge for the Staff of Creation on Cinder's belt, managing to seize it. However, Cinder spins around and strikes Winter with her sword, knocking her backward; she loses the Staff, which falls onto one of the paths. Unwilling to risk exposing herself to Winter in a race for the Staff, Cinder instead aims a flame attack at Jaune and Weiss; Winter immediately notices the danger. Jaune manages to deflect the flames with his Hard-Light grenade, but the force of the attack throws him and Weiss backward. As Winter flies toward them at high speed, Cinder uses her Semblance to generate an explosion under their feet, breaking Jaune's Aura and throwing Weiss off the path. Winter can only watch in horror as her sister plummets into the void. She lands next to Jaune, taking a moment to vent her grief and frustration, before angrily focusing on Cinder, who has recovered the Staff.

Before the Maidens can resume their battle, an eerie, high-pitched scream shakes the pocket dimension, alerting all three that Salem cannot be far. With Jaune reminding her that they need to go, Winter vengefully tells Cinder that she will pay for everything she's done, then flies toward the Vacuo portal. After glancing at the Staff, Cinder flies back through the portal to the Vault.

A YouTube channel by the name of Thrash476 uploaded a video titled RWBY - Melting Point which featured a 6 second edited clip of Winter and Cinder with the song Hello by Lionel Richie in the background. This is believed to be the first known instance of shipping between the two characters publicly online. They named the ship "Melting Point" because fire brings ice to its "Melting Point", a dynamic they feel captures what a relationship between the two would look like.

The ship name has gone through a number of changes, from Melting Point to Icy Hot to Temperature Play to CinWin, up until April of 2020 when Twitter started calling it Snowfall.

Snowfall is a rarepair in the RWBY fandom. Mainly because both characters are enemies and have never interacted with each other until Volume 7.

It's fanon content is mostly comprised of alternate universes and/or past relationships. Plenty of the shippers on both Twitter and Tumblr see them more as Past Lovers to Enemies in a canon divergent setting. It is popular in AU's where Cinder is good. They also loved the contrasting color scheme both characters had going on. Snowfall has a decent fanbase on both Twitter and Tumblr, and as of currently has 74 fanfics on AO3. 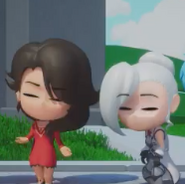