Once Upon A Time
Snow White and the Seven Dwarfs

“Is this the only way you can catch a woman, by entrapping her?”
— Snow

Snowing is the het ship between Snow and Charming from the Once Upon A Time and Snow White and the Seven Dwarfs fandoms.

As Snow White sings while doing her cleaning chores, the Prince follows the beauty sound of her voice he hears; and approaches Snow White while she looks at her own refection in the well's water. She was heisted about him at first, since he is a stranger, but after the short time they spent together she became more at eased with the Prince as they fell in love with each other. The Evil Queen on the other hand wasn't pleased with the fact that her step-daughter has found herself a prince, and her first attempt to have Snow White killed is what kept the two lovers apart as Snow White was forced to flea before she would tell her prince why she left without warning.

The Prince arriving where the dwarfs have decided to please her subjects that he has been looking for Snow White, and despite the two only knowing each other for a short amount of time the strength of their love was enough to help the Prince curse Snow White when he gives her a true love's kiss. With the Evil Queen no longer around to harm Snow White ever again, the Prince takes her take to the castle where they have their happy ever after.

Snow and Charming's love is true love, even more special than the average true love. They have two children, Emma Swan and Prince Neal, and a grandson, Henry Mills.

Their first meeting was less than friendly — Snow attacked Charming's carriage, and stole his mother's ring. He chased after her, but was surprised she was a woman, which allowed her to get away. Over time, Snow and Charming fell in love. King George did not approve of the relationship as Charming was set to marry Princess Abigail against his will. After around a year of being together, Snow and Charming got married, but their wedding was interrupted by the Evil Queen, who announced she would be unleashing a Dark Curse.

In Storybrooke, their cursed identities were called Mary Margaret Blanchard and David Nolan. David was in a coma during the curse (as he was attacked shortly before the curse) and Mary Margaret visited his hospital bed every day. Not long after Emma's arrival in Storybrooke, David woke up from the coma but couldn't remember anything. It turned out that he was married to Kathryn (Abigail's cursed counterpart), but still developed feeling for Mary Margaret.

Emma Swan (b. October 22, 1983) was born shortly before the First Curse, which sent the inhabitants of the Enchanted Forest to Storybrooke where they didn't age for 28 years. Emma, destined to become a Savior to free the residents of Storybrooke, was protected from the curse with a magic wardrobe, and didn't know about her family for 28 years.

Prince Neal was conceived after the Storybrooke citizens returned to their own realm. However, the curse is reset and they are returned to the modern world missing their memories from the past few months. Snow and Charming realize they must have been gone for several months due to Snow's pregnancy progression.

“Whoever married Katherine, it's not me. I didn't choose her. I'm choosing you”
— David to Mary Margaret

Lady Of The Lake

Disney/OUAT Snow White being kissed awake by her Prince 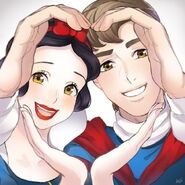