Soapies is the femslash ship between Mahiru Koizumi and Hiyoko Saionji from the Danganronpa fandom.

Hiyoko's friendship with Mahiru blooms in Chapter 2, when Mahiru was the only one who offered to help Hiyoko wear her kimono properly and helps her take a shower. Since then, Hiyoko regularly referred to Mahiru as her 'big sis' or 'big sister Mahiru'. Hiyoko states that Mahiru is the only person who isn't weird and acts very casual. Both girls are shown blushing with each other. When Hiyoko says that Mahiru is cool and she wants to kiss her, Mahiru blushes and Ibuki says "Welcome to the world of girl-love!"

Although Mahiru was initially reluctant to be dragged around by Hiyoko, it is evidence that Hiyoko greatly looked up to the other as she was devastated by Mahiru's death, and later made her a memorial. Even after the events of Chapter 2, Hiyoko tries to take a shower and put her clothes back on by herself since Mahiru had taught her with so much patience, and was extremely frustrated to find out that she couldn't.

In the manga, it is shown that Hiyoko visited Mahiru's cottage. Hiyoko compliments Mahiru's photography skills and says that Mahiru should teach her how to use the camera one day. Hiyoko continues to say that she's not sure that her photos will turn out as good as Mahiru's, but she knows from looking at Mahiru's photos that it'll be fun. Mahiru blushes and suggests that the two should take pictures sometime together. The two then go to investigate the new island.

Later, it's revealed that Mahiru was one of Hiyoko's best friends during her time at Hope's Peak Academy as well, calling her "Big Sis" and stating she loves her. Despite their close friendship, Hiyoko involved Mahiru in her mischievous plot which included aphrodisiacs. Hiyoko later comforted Mahiru after Sato's death.

Upon awakening from their coma, Hiyoko is seen happily chatting with Mahiru and celebrating with her, Mikan, and Ibuki on the ship after the battle has ended.

According to Kazutaka Kodaka, Hiyoko's school memories with Mahiru are very precious to her, explaining why she became close with Mahiru even after losing her memories in the Neo World Program.

In the non-canon "Danganronpa V3" bonus mode Ultimate Talent Development Plan, Hiyoko stated she feels lonely when Mahiru isn't around and that looking at her photos makes her feel better.

“Why are you talking to me? I would've been totally happy if you were Mahiru instead!”
— Hiyoko after Hajime invites her to hang out in Chapter 2

“There's no way Mahiru would play video games! She's not like that slowpoke gamer girl over there!”
— Hiyoko about Mahiru and Chiaki, Chapter 2

“See...I already told you... There's no way I'd kill Mahiru... Cause...Mahiru taught me how to wear a kimono...and she was very, very kind... There's no way I would kill a nice person like her! Why wouldn't you believe me earlier!?”
— Hiyoko, Chapter 2 Class Trial

“Unlike everyone else here, Mahiru was someone I wasn't embarrassed to be seen with...”
— Hiyoko, Chapter 2 Class Trial

“I wonder...what Mahiru would do...”
— Hiyoko after Hajime invites her to hang out in Chapter 3

The ship came to existence as a result of Mahiru and Hiyoko's friendship, which developed at the start of Chapter 2. Mahiru being the only person whom Hiyoko liked and respected, as well as Mahiru defending Hiyoko when the others pointed out the latter started stinking also helped. The ship was even further fueled by the bonus scene in which they took a shower together, which Hiyoko seemed to enjoy. Said scene even created the nickname for the ship, used as the title of this page.

In their fan works, fans tend to drop their "big sister/little sister" like relationship in favor of an actual sexual attraction to each other. Sometimes it's portrayed as a one-sided attraction on Hiyoko's side. Other fanfictions show the two's attraction to one another being mutual. 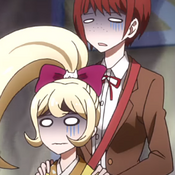 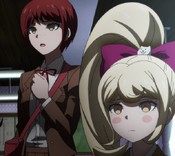 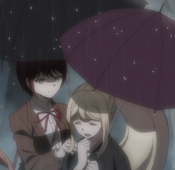 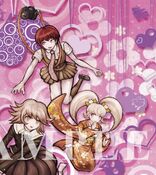 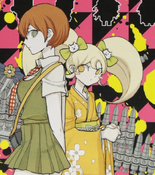 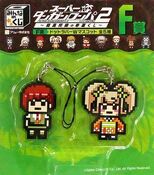 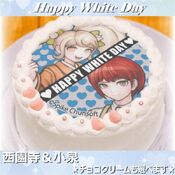 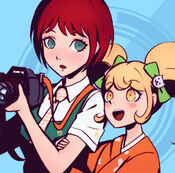