Sonic the Hedgehog
My Little Pony

SonDash is the het ship between Sonic and Rainbow Dash from the Sonic the Hedgehog and My Little Pony fandoms.

As both characters are from different franchises, they have never met.

Despite this fact, Sonic and Rainbow Dash do have a few things in common that would help them to get along with one another. Such examples being their super-speed abilities and with their names having something to do with it. The two take great pride in their speed and that has made them rather arrogant and competitive, but the loyalty they have for their friends helps them to not get consumed by it. Since their friends helping Sonic and Dash when their speed lands them in trouble and combine their talents with Dash and Sonic’s speed in order to help those in need. When they encountered those who use music to affect people's minds for their own gain, the two and their friends form a band to counteract it with Sonic and Rainbow Dash on lead guitar. The two and their bandmates have also used their music to bring people together.

Similar to how Rainbow Dash has been entrusted with a magical jewel and a small crystal allows her Equestria Girls counterpart to use her super speed in the human world, along with them helping her to transform in order fight powerful threats, Sonic draws power from the Chaos Emeralds to transform into his super state. In both Sonic Boom and Equestria Girls it shows that their alternate counterparts enjoy a good game of soccer.

SonDash is considered to be one of the most popular ships in the Sonic/My Little Pony crossover fandom. Sonic and Rainbow Dash’s similar traits, like their need for speed and blue being their main color, inspires fans to ship them.

Sonic-Rainboom is a fanclub dedicated to Sonic/MLP crossover-related media, including ships like this one. Fan art featuring their alternative forms in Sonic Boom and Equestria Girls are also popular, as they depict Rainbow Dash as one of the animal-like creatures who reside in Sonic’s world, place a pony or human Sonic in one of the two MLP universes or keep Sonic as his hedgehog self beside EG Rainbow Dash. Sonic has been paired up with humans before, and there have even been fans of the ship who have the two as animal-human hybrid versions of themselves.

There has also been fan art of Rainbow Dash with Werehog Sonic, which might be a nod to the time when one of her friends was turned into a vampire-like pony, and werewolves being also classic monsters. While the two being proud for their speed has fans drawing them racing one another to see which one of them is quicker, or combined their speed abilities to fight villains and give Rainbow Dash her own super form mode beside Sonic when he is in his, along with having Sonic and Rainbow Dash playing rock music together as a guitar duet. Since the two using music to save people with their friends is another trait that inspires fans to ship them.

SonDash has also got fans to ship Tails with either Fluttershy or Scootaloo, since Rainbow Dash is close with both Pegasi and some see Scootaloo as Rainbow Dash’s Tails. Due to some comic-con/role playing AU fan art having the two as Sonic and Tails or place them in Sonic and Tails style hoodies, along with having Rainbow Dash a Sonic the Hedgehog fan since his games are right up her ally.

Currently on AO3, the ship only has one fanfic on the website, while FanFiction.Net has 50 out of 164 in one of its Sonic-related crossover categories.

SonDash on the Sonic ships Wikia 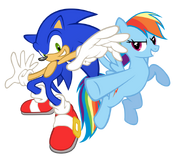