Shadow – “So, there’s more to you than just looking like me. What are you anyway?”
Sonic – “What you see is what you get! Just a guy that loves adventure! I’m Sonic the Hedgehog!”
— Sonic Adventure 2

Sonadow is the slash ship between Sonic and Shadow from the Sonic the Hedgehog fandom.

In most canons, both Sonic and Shadow share an intense rivalry, starting as enemies when they first met up.

When they first met as enemies in Sonic Adventure 2, Shadow believed Sonic to have been copying him, with a mutual belief from Sonic, but later they became rivals after Shadow’s amnesia. Since meeting each other, there has been a never-ending competition between the two, and their battles can range from friendly races to fierce death battles. In any case, one always wants to outdo the other.

Now there is mutual respect between them despite their ferocious rivalry and frequent fights. Over time, Shadow has become more confident about Sonic doing what is right, and Sonic has become more accepted of Shadow’s violent attitude as well.

Their relationship is similar to the games. However, there was once a moment when Sonic felt sadness for his rival as Shadow had presumably perished after the destruction of Letter of Gabriel, but after the timeline was reset, Sonic immediately called and checked up on Shadow, and was elated to find him alive.

Their relationship is similar to the games, but the first time they met, Shadow showed interest in meeting Sonic, noting their similarities and mocking Sonic as a weak opponent upon defeating Sonic in combat. However, he later changed this view about Sonic after seeing Sonic use Chaos Control. Shadow became impressed by Sonic and respected him as a rival ever since.

In Sonic Boom, they are tense rivals. Unlike most other canons, the two never showed partnership even once. However, Shadow has a small degree of respect towards Sonic, and, in fact, fighting against him is one of the few things Shadow ever shows an interest in. This is seen in media where Shadow has appearances: Rise of Lyric, Shattered Crystal (under the control of Lyric), “It Takes a Village to Defeat a Hedgehog”, and “Eggman: The Video Game” (parts one and two).

Shadow – “It all starts with this. A Jewel containing the Ultimate power.”
Sonic – “That’s the Chaos Emerald! Now I know what’s going on! The military has mistaken ME for the likes of YOU! SO... where do ya think you’re going with that Emerald!? SAY SOMETHING YOU FAKE HEDGEHOG!”
Shadow – “Chaos Control!”
Sonic – “Wow! He’s fast! Hey, it’s not his speed, he must be using the Chaos Emerald to warp.”
Shadow – “My name is Shadow. I’m the world’s Ultimate life form. There’s no time for games... FAREWELL!”
Sonic – “Kuu...! Shadow... What IS he?”
— Sonic Adventure 2

Sonic – “Now that was sweet, Shadow!”
Shadow – “Yeah... Well I’m not here to save you.”
Sonic – “Thought you might say something like that. How about a little friendly competition?”
Shadow – “Don’t waste my time.”
— Shadow the Hedgehog

Shadow – “Get outta my way!”
Sonic – “Shadow! Why are you siding with those Black Creatures!?”
Shadow – “Siding with them? You’re joking, right? I’m just siding to whoever goes up against you! This time you’re going down, Sonic!”
Sonic – “[chuckles] If that’s how it’s gonna be, Shadow, then BRING IT ON!”
Shadow – “Just say when!”
— Shadow the Hedgehog

“Shadow... Why...why are you siding with them?”
— Sonic, Shadow the Hedgehog

Shadow: “Heh, looks like I don’t need to be too worried.”
Sonic: “What was that?”
Tails: “Were you worried if we’d get hurt trying to rescue the Wisps?”
Shadow: “Hmph!”
Sonic: “I’ll just take that as a compliment.”
— Sonic Colors (Nintendo DS)

Shadow – “Infinite can create virtual reality projections. They have mass and form, but no heart or soul.”
Sonic – “Virtual reality? So all those familiar faces that were a part of Eggman’s army...”
Shadow – “Replicas. The problem is, they may not be real, but their powers are as formidable as the originals. According to Rouge, Infinite can create unlimited numbers of them.”
Sonic – “So fight after fight, he can just keep craking up counterfeits?”
Shadow – “Exactly. As it stands there’s no way we can win this.”
Sonic – “Of course we can with this, we always do! We just haven’t figured that part out, yet.”
— Sonic Forces

“Your shoddy craftsmanship brings shame on all hedgehog-kind. And for that, you shall perish!”
— Shadow, Sonic Boom episode 52 “It Takes a Village to Defeat a Hedgehog”

Sonadow is the most popular slash ship in the fandom and still has a large fan-following. Currently, on AO3, it is the most popular Sonic ship on the website. The main reasons the two are shipped is for their mutual understanding, underlying care for each other, mutual respect, and rivalry. Their connection is something words cannot describe and is conveyed mostly through action and subtleties.

Due to misinformation and misconception spread on purpose by those who dislike the ship and a large organization of "fans" within the fandom whose purpose or goal is to cause discourse, many fans misunderstand this ship. Many believe the misconception that the two constantly fight or compete due to being bitter enemies, solely rivals, or due to hating each other. However, as the games progress, both Sonic and Shadow, besides rivals, have grown to become allies and friends with the occasional friendly rivalry competition and possibly future fights due to disagreements or conflicting goals and ideals ("...both share the philosophy of following their hearts' desires, which makes them colliding with each other, crossing paths with each other, and sometimes dividing into friend and foe," as stated on the info under the Sonic x Shadow story on the Sonic Channel JP). One of the things that further confuse people is that Shadow acts like a tsundere. Because he acts like a tsundere, some of the things he says cannot be taken at face value. For example, in Team Sonic Racing, he says to Sonic, "I’m not here for you..." when Sonic did not ask or say that Shadow was. It's also worth noting that not all English material (this counts for all ships/canon), reflects current SEGA of Japan's views or has been fully approved by them. Some decisions are/were made solely by America/Europe SEGA/Sonic and some decisions were a joint agreement with SEGA of Japan/Sonic Team. Examples of mainly/solely English decided content are some mobile apps like SEGA Heroes (some apps, like Sonic Forces: Speed Battle, may have been initially approved to create by Iizuka Takashi, but he did not overlook it afterwards), Sonic Speed Simulator, and Sonic Chronicles: The Dark Brotherhood. Examples of joint decisions or Japanese content include the Sonic Channel JP 2021 calendar stories (An example), Sonic Channel JP artwork, Twitter Takeover #5 (it was a joint event between both English and Japanese sides), Speed of Sound! One question and One Answer special event where Sonic answers questions from fans, and most Sonic games. For spinoffs of different universes like Sonic Boom, Sonic X, and the comics, they are not canon to the main canon/game canon, so therefore, are different and sometimes reflect the original material/canon differently or portray a different interpretation of it. Another thing worth noting is that Sonic/SEGA is about moving forward towards the future. This means that things, characters, and people evolve, can change, and that some past things don't matter/can change. An example is how Sonic Team's head has changed three times with the current head being Iizuka Takashi and with that, came a change in visions. So old things made under a different head does not reflect the current vision of the current head. All in all, it's best to look at the more current games and content made and approved by the current SEGA of Japan/Sonic Team to get a better idea or understanding of things (when it comes to needing translations, be cautious and make sure the translations come from Sonic/Sonic Team/SEGA (SEGA Asia does not count as a main branch for they aren't as involved and have mistranslated/omitted phrases from Sonic Team's content) themselves or someone who is completely unaffiliated with the Sonic franchise for there have been cases where people in the fandom mistranslate or twist things on purpose for their own selfish gains).

In 2017, SEGA officially acknowledged Sonadow in Twitter takeover #3. Despite Shadow stating, "One word Cassidy...No (or know)," to the question, "What do you think of Sonadow?" both Sonic and Shadow have been seen together more often in the years following after such as in Team Sonic Racing, the icon for Sonic Forces: Speed Battle app, the catch in the IDW Publishing Comics Issue #35, Sonic Dash pirate outfits in celebration of the 30th Sonic anniversary, the second half of the 30th Anniversary Symphony that featured I Am (All of Me) as well as the finale Live and Learn with cutscenes from Sonic Adventure 2, and the Sonic x Shadow Sonic Channel JP story. In general, especially during Sonic's 30th Anniversary year, Shadow has been appearing more often, such as in merchandise with his First 4 Figure statue and as a necklace by King Ice (along side Sonic, Tails and Knuckles necklaces), and as a playable character in the Sonic Minecraft DLC. This all has some fans scratching their heads as to why this is so. However, on September 15, 2021, during Twitter Takeover #5, the question, "What is everyone's most memorable adventure?" was asked by a Japanese user. Shadow's answer was, "Sonic reached out to save me before I fell to Earth from the ARK. If I hadn't waved him away, Sonic would have fallen with me. But his determination in trying...I'll never forget that. Until I did. But, we're not going to talk about that." Sonic said in response, "Shadow..." This moment got fans excited, touched, happy, and refueled.

Sonadow on Sonic ships Wikia
Sonadow on the Sonic the Hedgehog! Amino
Sonadow on Urban Dictionary 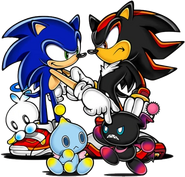 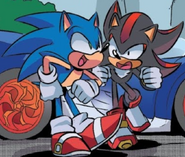 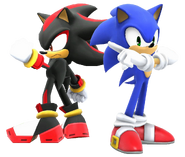 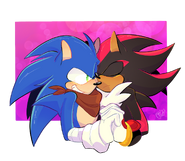