Shipping Wiki
Register
Don't have an account?
Sign In
Advertisement
in: Ships, Ships/Het, Sonic the Hedgehog (Fandom)/Ships,
and 5 more
English

Sonally is the het ship between Sonic and Sally from the Sonic the Hedgehog fandom.

This section is in need of major improvement. Please help improve this article by editing it. The only appearance of Sally in the video games is in Sonic the Hedgehog Spinball, where the squirrel is one of the prisoners freed by Sonic in the bonus round.

This section is in need of major improvement. Please help improve this article by editing it. Sonic and Sally are part of the Freedom Fighters, a group of anthropomorphic animals with a common objective to defeat the forces of Dr. Robotnik. They usually help each other out freeing other mobians from roboticization.

There are a few episodes in which Sonic and Sally share their feelings for each other, such as in “Hooked on Sonics” or “The Doomsday Project”. Both episodes depict them sharing a kiss, the former grossing out Tails nearby.

Adventures of Sonic the Hedgehog

Sonic and Sally have been dating for over a year by the time of one particular Christmas. The two had previously agreed that they wouldn't get each other gifts for Christmas, but every year since that agreement was made, Sally always broke it and still gave Sonic gifts. This made Sonic increasingly guilty about not getting her anything those years, to the point that he decides this year he would finally get her a bunch of gifts, and enlists Tails for help. After a crazy adventure involving Dr. Robotnik trying to replace Santa Clause and Sonic unlocking the secrets of Sally's gift from last year, he returned with a near mountain of gifts for her and kissed her under some mistletoe he held up before quickly departing for other matters.

This section is in need of major improvement. Please help improve this article by editing it. Though they have broken up multiple times unlike most canons, Sonic and Sally have been seen sharing a kiss occasionally. However, their romance had been put on hold soon after the latter was roboticized into Mecha Sally.

In an alternate future Zone known as Light Mobius, where Dr. Eggman was finally defeated, Sonic and Sally end up married with two children and benevolently ruled over Mobius as king and queen. Several years in, though, Sonic had been growing distant towards Tails and actively hostile towards Knuckles, something that Sally believes to be a sort of midlife crisis phase for him as well as his inexperience at being ruler. Sally would be one the one to encourage Sonic to action after it was revealed that reality was in danger and Sonic going back to the past would fix it, both being unaware of the consequences that would befall them both as a result.

Sonic changing history resulted in an altered timeline where Sally instead married Shadow. However, for Sally, it was purely to prevent Shadow's regime from negatively impacting the people too much, as she is one a handful of individuals that remembered the unaltered timeline, and as such remembers her marriage to Sonic. After Sonic helped depose Shadow as ruler, he and Sally reunited and renewed their relationship (as Sally considered her marriage to Shadow annulled), with Sonic asking if she had considered having kids.

Within five years after Shadow's reign ended, the two were (re)married and their two children were (re)born. At a celebration for the five years of piece, however, they were attacked by Shadow's former enforcers - the Dark Presence - only to be saved by the timely arrival of Silver who came to help stop a dark future for this timeline. The two ended up going seperate ways to stop that future: Sally and the children went into hiding in a safe house while Sonic went out to gather allies. Sally watched from the safe house as Sonic and a new iteration of the Freedom Fighters called the "Future Freedom Fighters" retook Castle Acorn from a returned Shadow. The two briefly communicated during this, with Sally congratulating her husband as well as informing him about the catacombs beneath the castle. Sonic would eventually find Sally and the kids and rescue them after Perfect Tikhaos - a monstrous fusion of Tikal and Chaos - ripped the castle apart, and they would celebrate with the other Freedom Fighters upon Perfect Tikhaos' defeat.

While ensconced in the safety of Knothole Village, Sally heard stories of Sonic's heroics against Dr. Eggman. These stories inspired her to form a team of rebels - the Freedom Fighters - to combat Eggman and his forces. Sally was eventually joined by Sonic, himself, and the two would lead the Freedom Fighters into eventually retaking their old home of Mobotropolis and rescuing Sally's father Nigel. With Eggman still having a significant hold on the world, Sonic departed the Freedom Fighters to continue pursuing him while Sally continued to lead them to continue their own fight. It wouldn't be until a few years later that the two would reunite.

Their reunion would occur after Sally crash landed in Mobotropolis while escaping Eggman's Death Egg, only to be pursued by Metal Sonic. Sonic - along with Tails - arrived in Mobotropolis to help Sally (as well as Amy) beat back Metal Sonic. Following the fight, Sally was happy to reunite with Sonic, but this quickly turned to confusion when Sonic started talking about things she didn't know about. Upon returning to the Freedom Fighter's flying headquarters, Sally and Amy were informed about the events of the Super Genesis Wave. The two touched Nicole - who had the ability to restore the memories of those from before the Wave (though Sally and Amy would be the last ones to do so) - and swiftly remembered their past history, which caused intense grief from the both of them. Sally was especially struck as she remembered her days as Mecha Sally. Sadly, they didn't have time to process all of this information as one of the after effects of the Super Genesis Wave - an intense build-up of energy - was about to crack the planet.

While Sonic was out investigating a lead on the last Chaos Emerald, Sally became increasingly nervous about him being gone for so long. This worry had to be put on hold when news came in that Mobotropolis was being attacked by a mysterious new robot - a version of Mega Man that had been corrupted. Sally and the other Freedom Fighters tried to fight M'egga Man, only to be brutally beaten, with Sally proclaiming that even Sonic wouldn't have been able to help if he were there. Sally was ultimately defeated while M'egga Man and the likewise corrupted Sonic - who was in Mega Man's world at the time - activated devices that fused their worlds together on behalf of the AI Sigma. Upon waking up, Sally saw the transformed Sonic fighting M'egga Man but put the horrifying revelation aside as she, the other Freedom Fighters, and several of Dr. Light's Robot Masters began saving civilians. When Sonic and Mega Man suddenly returned to normal (due to a plan that Drs. Eggman and Wily had) and an explosion that killed both Mega City's mayor and Team Dark, Sally immediately ran to Sonic (along with Amy) and helped him up as he explained what was going on and all present (including Maverick Hunter X, Sticks the Badger, and their allies, who arrived via portal) agreed to work together to end the crisis.

Eggman, Wily, and Xander Payne arrived aboard the Sky Patrol and revealed the location of Sigma's operations, allowing the united army to locate him and go on the offensive. On the way, the team is attacked by Sigma's Mechaniloid army and the Deadly Six, forcing Sonic join the others in fighting them while Sally coordinated from the ship. When the Deadly Six begin controlling Mega Man's and X's side of the army, Sally went out to help Sonic. With the team cornered, Sally ordered Sonic to go after the Deadly Six while she helped cover him, something Sonic wasn't willing to do, only for the Doctors to arrive and use their new weapon to defeat the Six and free the robots. Unfortunately, the fighting allowed Sigma to evolve into a more powerful form as he began summoning an army of Reploids to fight Sonic and company. The timely arrival of a returned Sticks with some new friends turns the tide and inspires Sally with a new strategy: go through the portals Sigma just opened up and get help from those worlds. Sonic and Sally separate to go through their own portals and get the needed assistance. Eventually everyone reunited and defeated Sigma, ending the crisis and returning the worlds to their previous states.

Firstborn daughter of Sonic and Sally, crown princess, and heir to the throne in the Light Mobius comics. She inherits her mother’s chipmunk body, and her father’s eye color and super speed. Sonia is named after Sonic’s younger sister from the Sonic Underground Zone.

Second-born son of Sonic and Sally, and the crown prince in the Light Mobius comics. He inherits his father’s personality and super speed, and his mother's eye color. Sonia is named after Sonic’s younger brother from the Sonic Underground Zone. Note the similar pronunciations but the different spellings.

Sonally is the most popular ship involving Sally and a somewhat popular ship in the Sonic fanbase, just surpassed by Sonamy due to its mainstream popularity and Amy’s major popularity as a female character in the series. However, both ships are in frequent ship wars, that even either Amy or Sally can be portrayed as the antagonist in fan works by each ship, respectively. 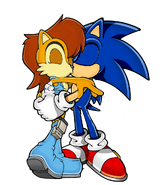 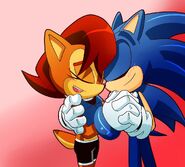