Sonaze is the het ship between Sonic and Blaze from the Sonic the Hedgehog fandom.

Due to a tear in the time-space continuum, Blaze ended up in Sonic's dimension, where she set up on a journey to collect the seven Sol Emeralds. On many occasions, Blaze was told to team up with Sonic the Hedgehog, but she refused, believing she could handle it herself. When Blaze was about to confront Dr. Eggman, who had the final Chaos Emerald, Sonic refused to let her fight alone. Angered by this, Blaze started to fight Sonic. Realizing that her selfishness had lead to the battle, Blaze befriended Sonic and accepted the fact that sometimes it was okay to need help.

As Eggman and Eggman Nega teamed up, so did Sonic and Blaze. Eggman kidnapped Cream in an attempt to get Blaze come confront the two Eggmen alone. Although it was not according to their plan, Sonic trusted Blaze to bring Cream back safely. However, Blaze was defeated by the two men the process, and she lost faith in herself. Sonic came to cheer Blaze on, which made Blaze regain faith in herself and allowed her to turn into Burning Blaze. She, along with Super Sonic, fought against the Eggmen and won the battle. After the victory, the two were pulled back into their dimensions, but before being separated, they made a promise to see each other again and shook hands.

Some time later, Sonic and his best friend Tails ended up in Blaze's dimension. The three, along with a local girl called Marine, teamed up to stop Eggman and Eggman Nega's evil plans. After defeating the two doctors, Blaze said that it may have been destiny that brought Sonic to her world.

Blaze was among the guests to attend Sonic's birthday party. When the Time Eater attacked, Blaze ended up trapped near Crisis City; eventually being saved by Sonic and his classic counterpart. She later cheered the two Sonics on before their battle against the Time Eater.

Sonaze has a neutral popularity in the fandom. Its main rivals are Sonamy for Sonic and Silvaze for Blaze. Sonaze isn’t the least popular ship in the mainstream, and generally viewed as the second most popular ship for Blaze after Silvaze.

People started to ship Sonic and Blaze since they saw Sonic as an influence on Blaze's dynamic character, and because there are some moments that can be considered "romantic" between these two (like the atmosphere in the ending of Sonic Rush, for example). Also by the fact that Sonic and Blaze share a theme that seems romantic. 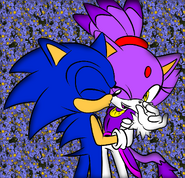 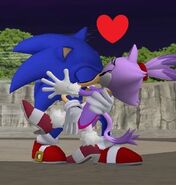