Soneach is the het ship between Sonic and Peach from the Super Smash Bros. fandom.

Sonic and Princess Peach met each other in the Mario and Sonic at the Olympic Games, where the two can be paired up for some of the team events like figure skating, and the Super Smash Bros. series, starting with Brawl.

They have many differences in personality—Sonic fights against hordes of robots while Peach usually gets kidnapped by Bowser. Even though there have been times were Sonic himself has gotten himself captured and has to rely on his friends to save him, like Peach commonly does. There have even been a few times where Peach does whatever she can to save her friends. Just as Peach has been part of a racing game that has her going at high speed in a go-kart, one of the Sonic games of a racing element requires the said blue Hedgehog to use a type of hover board. Peach learned how to use a surfboard in one episode of The Adventures of Super Mario Bros. 3. In Sonic Underground, Sonic has a sister and is of royal blood, just like Princess Peach and Daisy are like-sisters.

Both Sonic and Peach reside in worlds that are home to non-human people, but the two do have human friends and their TV shows even have Sonic and Peach stepping into the human world on Earth. One of their main iconic friends have red as their signature color, and even though Peach does not know that many raccoons like Sonic does, Peach and her friends are able to gain raccoon ears and tails to help them fly, like Sonic’s fox friend. When it comes to Sonic and Peach’s main enemy, both Dr. Eggman and Bowser want the two out of the way so they could complete their self-gain goals, which is why Peach is commonly kidnapped and Sonic makes sure that he is able to avoid getting destroyed, all while not letting Eggman and Bowser’s actions towards the two get the better of them. Thanks to the love and support of their friends who are always there for Sonic and Peach.

Peach is commonly featured as a damsel in distress, while Sonic is viewed as a hero, fans use these roles when they ship Sonic and Peach together. Since Sonic has been acquainted with a princess who he had saved from Dr. Eggman, while Peach has been shipped with non-human characters, where one of them is close to Sonic’s height, along with Peach’s using items to grant herself powers just as the Chaos Emeralds serve as Sonic’s power-ups, it allows Soneach fans to see those traits as ways for Sonic and Peach to get along with one another. There have even been fans who rival Soneach with Mareach, Sonamy and the main Sonic/Mario crossover ship SonMario, since Mario and Amy have been featured in a few Soneach fan-art and videos. Some of these YouTube videos have Sonic take Mario’s place in Peach’s stories as the blue hedgehog saves the princess from Bowser, instead of Mario. Along with there beings videos that have Sonic “stealing” Peach’s heart from Mario or Sonic and Mario switching girlfriends with one another, for fun.

Because the Sonic and Mario series are rival games, it can have a small group of fans view them as a Romeo and Juliet element. Since Peach’s kind nature and Sonic's moral compass when it comes to doing the right thing, they would have them put their rivalry aside. Fans see their friendship beginning with Sonic coming to Peach’s aid, and the princess wanting to thank the hedgehog, along with them and their allies teaming up in order to stop Dr. Eggman and Bowser.

Soneach may not be the most popular ship in the Super Smash Bros. or the Sonic/Mario crossover fandom, it still has a few loyal fans. Because both the Mario and Sonic at the Olympic Games and Super Smash Bros. series are canon universes that allow Sonic and Peach to meet and spend time together, most fans like to focus their fan-made work of the ship around those series. Along with fans taking screen-grabs of Sonic with Peach when they pair them up in team events in Mario and Sonic. 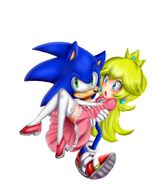 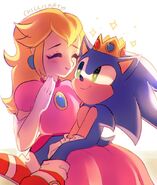