Songbird is the femslash ship between Fischl and Barbara from the Genshin Impact fandom.

Fischl and Barbara currently do not have any canon interactions in-game, or any voice-lines about each other. However, it is likely they do know each other. They are both from the same region, Mondstadt, and as Barbara is a popular idol and Fischl a rising star among the Adventurer's Guild's investigators, described as "earning the recognition of all". Barbara and Fischl also have some mutual friends such as Noelle and Bennett, with both having voicelines about the latter two. Additionally, they are both 4 star characters who have been obtainable through events - Fischl in the Unreconciled Stars event, and Barbara in the Barbara's Shining Debut/Baptism of Song events. They are also both available from Paimon's Bargains, and have been featured in banners together 3 times (Venti's first banner, Tartaglia's second banner, and Klee's second banner).

When it comes to gameplay, both characters can fit well together. Fischl holds the element Electro while Barbara uses the element Hydro. When using their elemental burst, Barbara can heal Fischl, and Fischl can apply Electro for Barbara. Both of them can fit well in a DPS Barbara electro-charged comp team or be options for a team for newer players in the game since both characters are easy to get. Fischl can be a main DPS while Barbara can be a healer. It can also go the other way around since DPS Barbara is getting more known.

In the Anthology commissioned by HoYoverse, both characters join a cooking competition alongside Bennett. Both of them did not want to be with Bennett, but Bennett was not removed from the competition. The two also both make good food. However, it is noticed that Barbara made the same dish she makes everyday, so her eyes looked like those of a dead fish while Fischl couldn't even crack an egg. In the end, neither of them win the competition since the place was exploded.

Songbird is a rare-pair within the Genshin Impact fandom, although still with a reasonable number of shippers. This ship is overshadowed by the more popular Fischnett and Barbennett, and also rivaled by some others such as Barbelle, Barbnyan, and Fischelle. Some fans also ship Noelle, Fischl, and Barbara all together as they are all friends who seem to be around the same age and are from the same region, Mondstadt, or because they can't choose between Barbelle, Fischelle, and Songbird.

Most fans hope to see the two having interactions soon, with a return to Mondstadt. Additionally, many shippers like to highlight the similarities between the two, such as their blonde hair in twin tails, as well as contrast. Barbara and Fischl have contrasting colour schemes of blue/white and purple/black respectively. Barbara is also very popular and seen in a positive light within Mondstadt as Deaconess of the Church of Favonius and an idol, whereas Fischl is often seen more negatively outside of her guild duties due to her roleplaying.

The ship currently has 53+ works on AO3. Despite being a rare-pair, the ship has a decent amount of fanart. 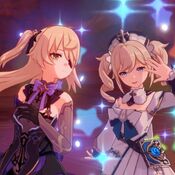 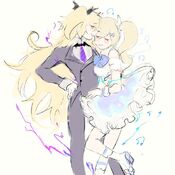 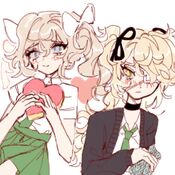 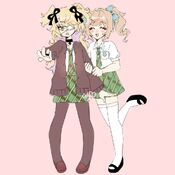