Sonicks is the het ship between Sonic and Sticks from the Sonic Boom fandom.

Sonic, Tails, Knuckles, and Amy first met Sticks in the unnamed village. She taught them how to find Shinies on hidden locations around the island. Found Shinies can be traded to her for princess crowns. Sticks happily took a "spatula" from Amy in front of Sonic and Knuckles at the end of the game.

Sonic and Sticks are both members of Team Sonic. On one occasion, Sonic attempted to help Sticks prepare for a formal event, with Sticks failing to walk formally and dance gracefully. Sonic escorted Sticks down the stairs during said event. When Eggman attacks the event and traps Sonic to prevent the hedgehog from stopping him, Sticks's none elegant actions allows her to free Sonic, before both of them and the rest of their friends defeat Dr. Eggman and save the event together.

When Sonic was dragged into helping out at the yard sell of Sticks' things in "Closed Door Policy", he could tell that his badger friend wasn't happy about it and tries to tell a "take charge" Amy this. After Sticks was captured by the Froglodytes she has kept sealed away, until Amy moved the plank that guarded the door, Sonic and the others use Sticks things to create the weapons they'll need to save her with. In the underground lair Sonic had manged to get his hands on a club that he gives Sticks, that she thanks him for, so she can be part of the battle as they make their escape.

After Sonic watches a news report about a pop star singer named Justin Beaver with Sticks and the others, Sonic agrees with Sticks's statement about Beaver fever being a market ploy that is targeted at crazy fan girls, before they learn that Amy is one of them. This leads to them hearing one of the Justin soundtracks that Amy has, Sonic hated it while Sticks falls in with love with it and started acting the way that Amy currently is. Sticks was meant to go rock climbing with Sonic and the others the next day, and after he asks her if she'll still be up for it even though her reply to Sonic's question was "Uh sure, whatever". The hedgehog didn't think much about the way she answered it or how she was starting to act like a crazy fan girl. When Sonic goes to pick Sticks up at her home, he is surprised that she has turned it into a tribute to Justin. The time that Sonic has spent with Sticks has told him that she isn't the type of person who would be fangirling it out, like Amy currently is with her, he got the feeling that Sticks's odd behaviour is somehow connected to Beaver Fever and looks into the matter when he follows Sticks and Amy into town. In order to help their investigation, Sonic forms a boy band with Tails and Knuckles, that later helps them to free Sticks and the other girls from the mind control within Justin's music. The badger comments the sweet sound of Sonic's guitar solo right after.

In Mario & Sonic at the Rio 2016 Olympic Games, Sticks appears alongside the regular version of Sonic. Sticks and Sonic in his Werehog form do appear as Wild Type characters in Sonic Runners, although otherwise Sticks has no connection to the Werehog form of Sonic in any universe.

In the Worlds Unite storyline, the Sonic Boom universe, where Sticks was from, collided with many others, including the Post-Super Genesis Wave universe, two Mega Man universes as well as various Sega and Capcom-based universes. During this event, Sticks met the Archie counterpart of Sonic, even to the point of asking why the hedgehog had beige arms (in contrast to the Sonic of her universe). This was the Post-Super Genesis Wave Sonic's first time meeting Sticks as she did not have a counterpart in his universe.

The ship gained some popularity due to the Sonic Boom episode "My Fair Sticksy". On AO3, the pairing is the third most popular ship for Sticks, although with only six works as of April 2021. 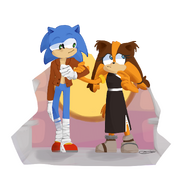