Sonilver is the slash ship between Sonic and Silver from the Sonic the Hedgehog fandom.

Sonic and Silver started out on bad terms in the 2006 game, Sonic the Hedgehog. Silver was manipulated by Mephiles into thinking Sonic was the one responsible for releasing Iblis and causing destruction in the future. Silver attacked Sonic twice but was stopped both times, first by Amy and later by Shadow. When Silver found out the truth about Mephiles, he and Blaze teamed up with Sonic to help him save Elise.

In the Last Story, Silver was among the ones searching Chaos Emeralds to resurrect Sonic. Sonic, Silver and Shadow turned into their Super forms at the end of the game to defeat Solaris. However, in the end, the events of the game were erased as Sonic and Elise destroyed Solaris in the past.

Silver met Sonic in later games. In Sonic Rivals, its sequel, and Sonic Generations, the two were rivals. At the end of the console version of the latter, Silver became an ally. Silver was also Sonic's ally in other games such as the Nintendo DS version of Sonic Colors and Sonic Forces.

Silver spent most of his time looking for the traitor of the Freedom Fighters. He suspected Sonic at first, although he was proven false. In the end, he found out the traitor was actually Sally Acorn, and that she didn't betray them willingly but rather by being roboticized, and Silver teamed up with Sonic and other Freedom Fighters to restore Sally.

Silver and Sonic had events similar to those in Sonic Forces, after which Silver returned back to his timeline. Noticing things were still wrong, Silver returned to the present. He went to help Sonic in Eggman's base, and defended him from a Spina.

Sonilver is a somewhat popular ship, as it is among the most popular slash ships in the fandom. It is not as popular as Sonadow.

Sonilver hastag on the Sonic the Hedgehog! Amino 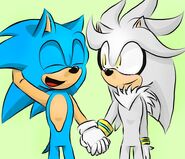 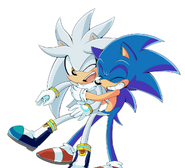