Sonjime is the het ship between Hajime Hinata and Sonia Nevermind from the Danganronpa fandom.

Sonia and Hajime are both participants in the Killing School Trip. When Hajime is introduced to Sonia in the prologue, he finds himself mesmerized by Sonia's beautiful appearance, as well as the regality she carries about her. He describes that she has a 'mysterious charm that [he wants] to gaze at forever.' When Nagito informs Hajime that Sonia is genuine royalty, Hajime expresses that he is not surprised in the slightest due to her grace.

During the second chapter, Hajime agrees to go with Kazuichi Souda on his quest to spot some of he girls in bathing suits - Sonia being one of the girls in question.

Later this chapter, Sonia attempts to defend Gundham when Hajime chooses to convict him. The duo work together to combat Hajime's efforts to prove Gundham's crimes.

In chapter six, Sonia is in disbelief when Junko reveals Hajime's true identity as Izuru Kamukura. After succumbing to despair at the hands of the Junko Enoshima AI, Hajime's words inspire Sonia to return to hope. She realizes that the future they are making are the ones their friends made for them, and that the fallen will not be forgotten. Sonia and Hajime are two of the five survivors of their Killing School Trip.

During Sonia's free time events, Hajime listens to Sonia speak about her country, Novoselic, and the traditions that surround marriage. As they speak more often, Hajime eventually learns that Sonia is a J-drama fangirl and is drawn to the occult. Sonia expresses that no matter where she goes, she is always a princess. She confesses that she always has to hide her fear away because of her duties as a ruler, to which Hajime insists that he sees her as a regular school girl, and that she doesn't need to try so hard around him. This seems to relieve her, and she expresses gratitude for his words.

In their final event together, Sonia opens up to Hajime about her fear regarding her separation from her country. Hajime admires Sonia's ability to keep so composed when all along she'd been holding in so much uncertainty. Soon after, however, Sonia decides that Hajime matches the description of a hero from Novoselican legend. She declares that he is destined to 'swing the golden makongo' (a symbol of marriage in Sonia's country) with a princess and establish prosperity in the kingdom. Sonia then declares Hajime her destined one, and declares that when their time comes they must both capture the golden makongo (implying that they are to be married.) Hajime expresses that he enjoys the idea of this future very much.

Sonia ends the events by stating that Hajime must learn a great deal before he can become her husband and the ruler of her country, but they both seem determined to make such a thing come true.

During Sonia's island mode ending, Sonia expresses that she wishes for she and Hajime to have their honeymoon on the island, before calling him 'darling.' Hajime blushes at the pet name, but recalls his promise to help Sonia defeat the golden makongo. She then claims that soon enough they shall become a 'lovesick couple' when the time comes. Finally, Sonia states that by returning to her country, she is losing her freedom once again, but that she refuses to give up Hajime, her hero. She goes on to further state that he is more important to her than anything else in this world. They end the events by formally deciding that they will defeat the makongo together, implying that they intend to marry each other.

The ship sailed due to Sonia's promise to marry Hajime in her free time events. This ship was only fueled by her Island Mode, in which their future marriage plan was given even more attention. In the main plot, Sonia's romantic focus was in a love triangle with Gundham Tanaka and Kazuichi Souda. For this reason, not everyone is aware of the ship.

The ship's main rival are ships like Sounia and Sondam, though some fans enjoy them all. 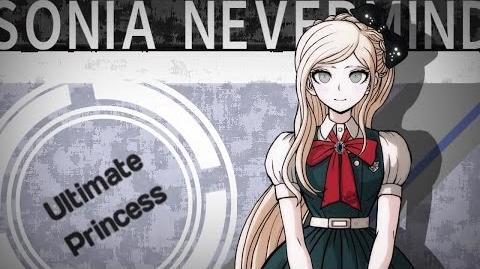 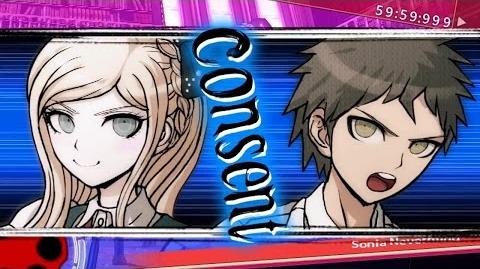 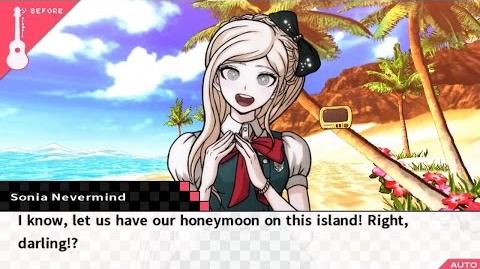 Retrieved from "https://shipping.fandom.com/wiki/Sonjime?oldid=179929"
Community content is available under CC-BY-SA unless otherwise noted.