View source
watch 02:56
Doctor Strange in The Multiverse o Madness - The Loop
Do you like this video?
Play Sound
WOAH! THAT'S ONE SMALL SHIP!
• THIS ARTICLE IS A STUB. YOU CAN HELP BY EXPANDING IT •
Stub pages are deleted after 4 months. If not filled out enough, Sonsoudam will be deleted on
8/9/22

Friends/Classmates/One-sided crush from Kazuichi towards Sonia

Sonsoudam is the polyship between Gundham Tanaka, Kazuichi Soda, and Sonia Nevermind from the Danganronpa fandom.

In Danganronpa 2, Kazuichi quickly develops an obsessive crush on Sonia. Sonia on the other hand seems to never notice him or scold him for his mistakes at best. Meanwhile, Sonia is shown to be impressed by Gundham and his Four Dark Devas of Destruction. In Chapter 2, when Kazuichi invites Hajime Hinata to go to the girls' beach party with him, Gundham wants to join as well, but is rejected for being too weird. Gundham then acts like he didn't want to go to begin with and pretends he prefers loneliness anyway. In Chapter 4, the love triangle becomes much more important, with Sonia quickly choosing to investigate the Fun House with Gundham twice. This resulted in Chiaki and Nagito telling Kazuichi he's probably being rejected and avoided.

Gundham’s execution affects Sonia heavily. After his death, she takes care of his hamsters. Kazuichi and Sonia go on to become two of the five the survivors of the Killing School Trip, although their relationship doesn't change. Despair Arc shows that the trio had pretty much the same dynamics with each other back during their time in Hope's Peak Academy. Kazuichi is still attracted to Sonia and Sonia still shares her occult hobbies with Gundham and is overall impressed by him. Kazuichi and Gundham however seem to have friendlier rivalry in this season, though.

In the OVA, Super Danganronpa 2.5: Nagito Komaeda vs. the World Destroyer, in Nagito's illusionary world, Sonia seems to actually return Kazuichi's feelings and the two appear to be dating. Gundham's reaction to this is not shown though, as he has a very minor role in the episode. Despite this, some like to imagine he’d be jealous by the two being together. This is because it’s widely believed Gundham and Sonia have feelings for one another. This would also make sense as to why Kazuichi is so jealous.

The ship has sailed as a result of Kazuichi's canonical love interest in Sonia. This along with Sonia's and Gundham’s close friendship. With some fans liking Sounia, Soudam and Sondam equally or not being able to choose between the three, the polyship has been created. The trio is often shown together on promotional art. While separate ships with the three are more popular, the ship still has a fan base. 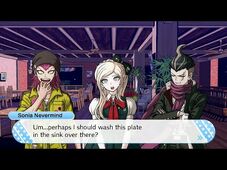 Me, you and Souda