Sonuckles is the slash ship between Sonic and Knuckles from the Sonic the Hedgehog fandom.

The two of them were initially enemies in Sonic the Hedgehog 3 due to Eggman's trickery, but after Knuckles realized the truth, he and Sonic came to have a more friendly relationship. Despite this, however, Knuckles still held an inhospitable attitude towards Sonic, due to their different points of view and natures.

Over time, Knuckles' relationship with Sonic has improved and he has come to see Sonic as both a rival and one of his best friends, helping each other in many situations. Since Sonic Heroes, the two have been members of Team Sonic along with Tails, although the three were already something of a team in Sonic Adventure 2.

Sonic and Knuckles are best friends, with the echidna explicitly stating their relationship to the President while he tried to contact Sonic or Tails explaining the situation with Hyper Metal Sonic.

At one point, Sonic steps Knuckles on his head while fighting Hyper Metal Sonic. At the end of the film, Knuckles hits Sonic at the head as payback, with Sonic chasing the echidna demanding an explanation.

In "Friend or Foe?", Sonic and his siblings Sonia and Manic, in their search for their mother, traveled to the Floating Island, being told by the oracle to "beware the echidna". They reached a sacred pool and unknowingly activated it. Knuckles confronted the trio and called them hedgehog thieves. Sonic said that he didn't expect a welcome like this, and replied that the hedgehogs are thieves in a way. Knuckles spun his arms, creating a wind that pushed Sonic to a tree, then dug pit traps prepared for the hedgehogs. Sonia tried reasoning with Knuckles to no avail. After a short fight with Sonic, Knuckles activated the pit traps, pulling the hedgehogs down. Sonic escaped easily though, later he dodges Knuckles' attacks and allows himself to be chased by him. The chase ends near some rocky bridges on the island, in which Knuckles breaks one of them with the intent of Sonic falling down to earth, however with his super-speed Sonic was able to catch up to him. The ground around Sonic began to shake, tipping Knuckles close to falling from the island's edge. After a quick banter, Knuckles fell off the edge, but Sonic saved him, who asked why would Sonic do that. Knuckles was tricked into thinking that the hedgehogs were his enemies, although he eventually found out the truth. Knowing that Sleet and Dingo would steal the island's Chaos Emerald, Knuckles activates a nearby pool confirming the duo's plan. Knuckles, Sonic, and his siblings were able to catch up to them. With their musical help, Knuckles was able to destroy as many Swatbots and drive the duo away while Sonic recovered the Chaos Emerald. Later that night, Knuckles treated the hedgehogs to krupnik and asked their purpose for coming to the island. When Manic replied that they were searching for their mother, Knuckles told them the fact that he has met their mother when he was young.

Following a long battle with Dr. Robotnik over the Chaos Emerald, Knuckles allows Sonic and his siblings to stay on the Floating Island if they ever need a break.

This section is in need of major improvement. Please help improve this article by editing it. Sonic and Knuckles are teammates, despite them being complete opposites: Knuckles' kindly personality contrasts with Sonic's snarky attitude. Knuckles considers Sonic his friend and is very loyal towards him. While though the two of them are always disagreeing with each other, they still share a mutual bond of respect.

Overall, they are the truest of friends, referring to each other as "bros".

Despite not interacting with each other directly in the series, Knuckles blames Sonic for stealing the Master Emerald when Eggman used the Tornado. After Knuckles punches Metal out of the lair, the echidna calmly left with the Emerald, not paying attention to Sonic and his friends.

Sonic and the Secret Rings

Sonuckles has neutral popularity, but it's not the most popular slash ship due to Sonadow's mainstream popularity in the fandom. However, the Sonic Boom version of Sonuckles did gain some fan-following due to Sonic and Knuckles' brother-like relationship in the show. 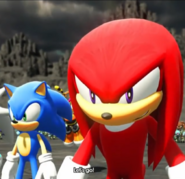 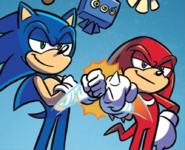 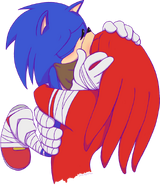 art by KrazyElf33
Add a photo to this gallery

Retrieved from "https://shipping.fandom.com/wiki/Sonuckles?oldid=253280"
Community content is available under CC-BY-SA unless otherwise noted.