Soudabuki is the het ship between Ibuki Mioda and Kazuichi Soda from the Danganronpa fandom.

Ibuki and Kazuichi appear to mostly have a neutral relationship. They are not overly close friends, but neither one of them harbors a grudge over the other. While they rarely interact with each other throughout Danganronpa 2: Goodbye Despair, they appear to mostly get along decently, as they both have a generally carefree attitude. During the prologue, they both acted optimistic about living on a tropical island, and were the first two who accepted Usami's suggestion of going swimming. Later in the same scene, Ibuki can be seen playfully chasing Kazuichi along the shoreline.

However, there are moments where both characters are put off by the other. Kazuichi is easily startled, and Ibuki's habit of popping up out of nowhere doesn't help with this. Kazuichi is also deeply disturbed by Ibuki's music, more so than anyone else in Class 77-B, going as far as to call it "cursed." Meanwhile, Ibuki has shown annoyance with Kazuichi's obsession with their fellow classmate, Sonia Nevermind. At one point during the second chapter, she calls him out on this by accusing him of showing up to the diner an hour before the girls just so he could see her.

The two characters seem to share some of the personality traits; they are both impulsive talkers and have been noted to have unique patterns of speech. Both Kazuichi and Ibuki have a tendency to express emotion any time they feel like it. While they both seem to like girls, it is in a shallow manner overall. Kazuichi's apparent crush on Sonia Nevermind was never very deep, as he is shown to be more attracted to her physical appearance, rather than her personality. Ibuki has flirted with other girls, but was never actually interested in having a relationship. A difference between the two, however, is that Ibuki has made advances towards boys as well.

The two also fail to interact with each other much throughout the Despair Arc, although Kazuichi's distaste for Ibuki's music appears to carry over, as he snidely refers to it as a "Death Metal Barbeque" at one point. While they have minimal interaction overall, the two do have a lot in common. They are both shown to be somewhat apprehensive and are usually among the first to panic when a situation seems dire. They have somewhat similar aesthetic looks as well. They both having hot pink hair with matching eyes--Kazuichi's coming from hair dye and contacts. Both are also shown to have an attraction to women, which is best displayed during a scene in Chapter 2 where both Ibuki and Kazuichi are admiring the girls wearing swimsuits, Chiaki Nanami and Peko Pekoyama in particular.

The ship mainly sailed due to the aesthetic similarities between the two characters. With their shared punk-rock style, many fans find Ibuki and Kazuichi to be visually appealing together, with some even suggesting that the two should start a band together. Some also find them to be socially compatible as well, as they both have a generally fun-loving attitude. Some fans believe that Ibuki would be a good match for Kazuichi if he were to finally get over his unrequited love of Sonia.

While not the most popular shipping choice for either character, losing to ships like Band Aid, Sondam, Sounia, and Twobuki, Soudabuki still has a respectable number of supporters, and an impressive amount of fan art dedicated to it. 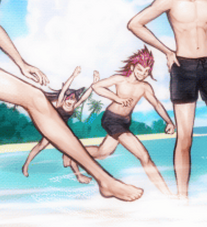 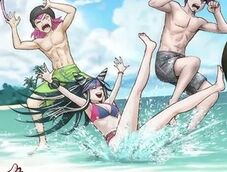 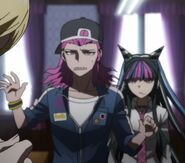 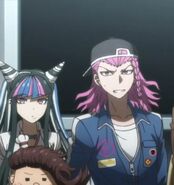 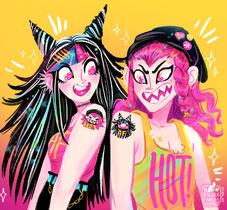 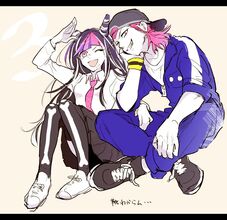 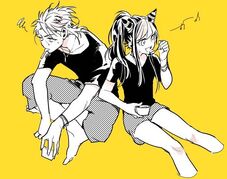