Soudanidai is the slash ship between Kazuichi Soda and Nekomaru Nidai from the Danganronpa fandom.

Kazuichi and Nekomaru interact a fair bit in Danganronpa 2: Goodbye Despair, especially during the second and fourth chapters.

In Chapter 1, after gathering at the hotel restaurant, the Ultimate Imposter questions Hajime Hinata about the whereabouts of Kazuichi. Hajime tells everyone that Kazuichi had ran away, and Nekomaru expresses consideration for his behavior, stating that it is understandable after what they had all witnessed the previous day.

In Chapter 2, Nagito Komaeda is noticeably absent from the group meeting, and Nekomaru dubiously states that he doesn't know anything about his disappearance. Kazuichi adds on, saying that Nekomaru is right, and that they should all just forget about Nagito. Chiaki Nanami points out that the two of them are acting suspicious, which they stutteringly deny. The following day, after convening at the restaurant once again, Nekomaru accidentally reveals that he had tied up Nagito, before frantically asking Kazuichi what they should do. Kazuichi angrily tells him not to rope him in, but slips up and reveals his involvement as well. The two then justify their actions by stating that Nagito tried to put them all in danger, and so it was necessary to prevent him from roaming around of his own free will. Most of the group consents to this decision. Later on, when Monokuma presents a game called Twilight Syndrome Murder Case as the students' next motive, Kazuichi suggests that they'll be okay as long as nobody plays it, and Nekomaru laughs while calling him a genius.

The two rarely speak to each other since then. However, in Chapter 3, after Nekomaru sacrifices himself to save Akane Owari from Monokuma, Kazuichi was the first to scream in panic, fearing that he had been killed. After it was discovered that his heart was still beating, Nekomaru was quickly rushed to the hospital on the third island. Kazuichi then asks if Nekomaru is going to be okay, hoping for a reassuring answer. Fortunately, Nekomaru is revealed to have survived his injuries at the end of the chapter.

At the beginning of Chapter 4, the group reacts in shock upon seeing that Nekomaru had been revived as a robot. Kazuichi is apparently unconvinced, and attempts to tear off Nekomaru's face, believing it is only a mask. After the authenticity of the situation settles in, Kazuichi's horror quickly turns to amazement at the technology. Kazuichi asks Nekomaru if he can dissemble him and take a look at his insides, which Nekomaru declines, as doing so will kill him. The following morning, Kazuichi continues to be astonished by Nekomaru's new form, and shows excitement whenever Nekomaru discovers a new function, often hoping it will be the ability to fly. While the group is exploring the fourth island, they are told that they will all receive a prize if they ride the roller coaster together. However, Kazuichi refuses, leading to Nekomaru having to using force.

In Chapter 5, following Nekomaru's death as a robot, Kazuichi salvaged some of his leftover parts to create Minimaru, to help cheer up Akane and the other remaining students.

The ship sailed after the two worked together to restrain Nagito in the second chapter. It was further fueled by Kazuichi's fascination with Nekomaru's robotic body in Chapter 4. Many fans were also moved by Kazuichi's Minimaru creation.

The ship is somewhat of a rare pairing in the fanbase. Nonetheless, it still has a small and dedicated following, with a respectable number of fan content. The ship is among the more popular for Nekomaru, rivaling Hinidai and Terunidai. However, it loses to Akanidai as Nekomaru's most popular ship. On Kazuichi's side, the ship loses in popularity to Kuzusouda, Sondam, Sonsoudam, Sounia, etc. 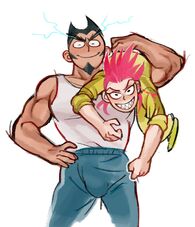 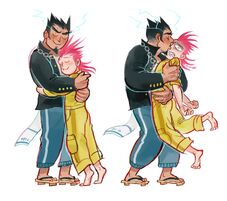 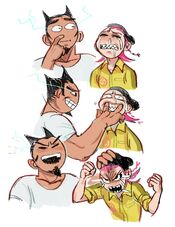