Soul Friends is the slash ship between Kazuichi Souda and Hajime Hinata from the Danganronpa fandom.

Hajime is a close friend of Kazuichi's. Kazuichi latches onto Hajime, calling him his "soul friend". In Chapter 2, Kazuichi asks Hajime to spend time with him and to go together at the girls' beach party. In a Special Time Event in Chapter 3, Kazuichi and Hajime go hide near Nekomaru's cottage to investigate what the "it" that he did to Akane really is.

In Chapter 4, a brief break up ensues when Kazuichi blames Hajime for "leading them" into Monokuma's trap and ends up turning to Nagito instead. Kazuichi’s trust issues cause him some conflict with Hajime, but he calms down quite soon and is willing to apologize. Despite some issues, he develops a close friendship with Hajime. However, Hajime can be quite annoyed by him, since he can act rather clingy and turns even more whiny and threatens to bug Hajime even more if he refuses to hang out with him.

In Island Mode, Kazuichi appears to question his sexuality around Hajime Hinata (for example, he has an excited and then confused reaction about taking clothes off with him and he's afraid he'll dream about a date with Hajime after he jokingly suggested one), only to comically confess to him that he is attracted to tanks.

They also have two events together, one of which they share with Fuyuhiko, in Danganronpa V3's bonus mode, Ultimate Talent Development Plan. In their own one, Hajime comes to cheer on Class 77-B during a sport festival. Kazuichi invites him to their basketball team since they're one member short. Hajime has doubts if he's the best choice, but Kazuichi manages to convince him to join.

In their event with Fuyuhiko, the trio meets before Chiaki's Christmas Party in a dining hall. Kazuichi asks Hajime to plan his birthday party on New Year's Eve, as that event itself isn't enough to gather classmates together, but someone's birthday is. Hajime agrees to plan his own birthday party for everyone, but only if Kazuichi and Fuyuhiko tell everyone they came up with it.

“So how about a scenario where you and I go to the beach, and then we run into the girls by "coincidence"? Hey, you better not say no. I can't ask any other guys to help me with it.”
— Kazuichi asking Hajime to go at the girls' beach party with him.

“I-I didn't say that just now! It was Hajime! He's a pervert, you know!”
— Kazuichi framing Hajime after Chiaki notices he was talking about her "jugs".

“Okay then, let's go my friend! Let's run to our goal!”
— Kazuichi encouraging Hajime to go investigate what Nekomaru's "it" is, in a Special Time Event in Chapter 3.

Kazuichi – “The truth is we don't know anything about you, so it's not my fault if I don't trust you...”
Hajime – “We've been together this whole time and you still don't know who I am!?”
Kazuichi – “Like that matters! It's not like I know the *real* you! Just like how...we didn't know anything about Mikan...”
— Kazuichi suspects Hajime of being a traitor in Chapter 4.

“The possibility isn't zero...I do think that it's extremely close to zero but...It's never gonna be zero, no matter what...I'm sorry Hajime.”
— Kazuichi wanting to trust Hajime, but being unable to.

Hajime/Izuru – “Your worth has nothing to do with being someone's classmate, you know?”
Kazuichi – “Hell, this guy was in the Reserve Course!”
Hajime/Izuru – “Hey...”
— Kazuichi and Hajime/Izuru while encouraging Ryota Mitarai to join them in Hope Arc.

“Oh, of course we'll celebrate your birthday, too! We're soul friends, after all! Getting to be with Miss Sonia on New Year's Day will be the best! Thanks for being born, Hajime!”
— Kazuichi is glad that Hajime's birthday can result in another party with Sonia, in their event with Fuyuhiko in Ultimate Talent Development Plan.

The ship sailed as a result of Hajime and Kazuichi's friendship. It started in Chapter 2 of Super Danganronpa 2. What fueled the ship even more is the fact that the two were always going on some perverted adventures together - going at the girls' beach party, investigating what Akane and Nekomaru's "it" is. It was also well-received for giving Kazuichi other important plot than his attraction to Sonia, which took a vast majority of his screentime.

When Kazuichi started suspecting Hajime as a traitor in Chapter 4, the ship received mixed feedback. Some abandoned it due to Kazuichi's distrust. Some actually liked the temporary conflict, as it wasn't completely unjustified and it gave the two and their friendship more depth. 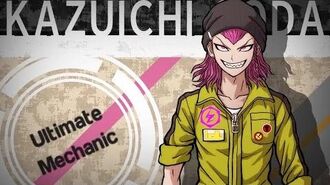 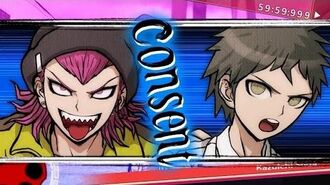 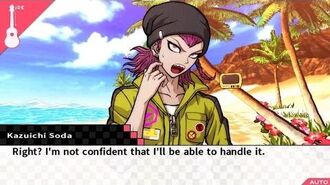 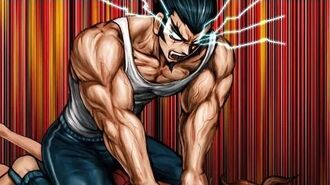 Retrieved from "https://shipping.fandom.com/wiki/Soul_Friends?oldid=175349"
Community content is available under CC-BY-SA unless otherwise noted.