Soumaeda is the slash ship between Kazuichi Soda and Nagito Komaeda from the Danganronpa fandom.

Both Kazuichi and Nagito are classmates of Class 77-B, and participants of the Killing School Trip.

During Danganronpa 3: The End of Hope's Peak Academy, Kazuichi makes a comment that nothing good ever happens to him when Nagito is around. Sure enough, Kazuichi is hit by a truck as Nagito received all the contents of the vending machine he was making a purchase from.

Later, the two are playing a game with Fuyuhiko Kuzuryu. Soda is excited, as it seems that he is winning. Soda takes the chance to mock Nagito's almost-win. However, Nagito's luck quickly turns the tables, causing Kazuichi to lose the game he was playing and express dismay.

Upon Nagito Komaeda's disappearance, when teacher Chisa Yukizome states that she's certain the class will miss Nagito, Soda is one of the earliest to insist that they likely won't. When Nagito returns to class, Soda is one of the students to have a displeased look on his face upon realizing that it is Nagito who has come back and not Mikan Tsumiki.

While the students search for Mikan, Kazuichi grows frustrated when they don't find her in the West District, accusing Nagito of lying about her whereabouts. Once ordered to, Kazuichi is the student who ends up carrying an unconscious Nagito on his back.

During the Killing School Trip in Danganronpa 2: Goodbye Despair, Kazuichi expresses great anxiety towards Nagito. Arguably, Kazuichi and Fuyuhiko are the two students who express the most dislike towards the Lucky Student. Nagito causes Kazuichi great fear and discomfort due to his strange and deranged nature.

After the first trial, Soda and Nekomaru Nidai work together to beat up and restrain Nagito, in order to prevent him from rigging any more killings.

During chapter four, Soda is dismayed when his crush, Sonia Nevermind, chooses to explore the Fun House with his romantic rivals and is forced to explore the Fun House with Nagito, instead. At the end of the chapter, after discovering the secret of the Final Dead Room, Nagito grows hateful and disgusted with the Ultimates, Kazuichi included. He expresses that Soda's slow-wittedness annoys him.

In the fifth chapter, Kazuichi becomes wrapped up in a plan to capture Nagito, who has gone rogue against the survivors in an attempt to out the traitor among them. This plan fails, resulting in Kazuichi being blown across the room by an explosion and Komaeda escaping. He is the most terrified by Nagito's bomb threat.

After Nagito's suicide, Kazuichi expresses no grief for the Lucky Student. In fact, he becomes polarized due to the true nature of Nagito's death: an attempt to end the lives of everyone on the island with the exception of Chiaki Nanami.

During Danganronpa 2.5, Nagito is seen being brotherly best friends with both Fuyuhiko and Kazuichi in his dream world. This is due to the fact that they are the students who dislike him the most in reality, and conveys that Nagito wishes he was closer to them both. Nagito also dreams that Soda ends up with his crush, Sonia, despite the fact that in reality the princess holds absolutely no interest towards the mechanic. Some believe that this implies Nagito wants Kazuichi to become happy. Upon waking from the program, Kazuichi makes a teasing but friendly comment to Nagito, before the lucky student hugs he and Fuyuhiko, making them both uncomfortable.

The ship sailed due to Nagito's behavior around Kazuichi Soda in Danganronpa 2.5. The conclusion of the animation only fueled the ship, showing that the two had become friendlier than they were in the killing game.

However, this ship is often overshadowed by the far more popular ships, Komahina, Soul Friends, Soudam and Sounia. 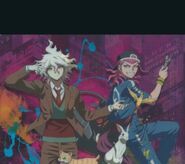