Sounia is the het ship between Sonia Nevermind and Kazuichi Soda from the Danganronpa fandom.

From the moment Kazuichi first speaks to Sonia, he bows down to her. Sonia is the only one he uses an honorific for, calling her "Miss Sonia." In addition, she is the only one he refers to on a first-name basis. Despite the amount of "respect" he gives her, he's constantly making comments about her body and appearance, in a rather gross fashion. For example, he claims in Chapter 2 that he has always wanted to see Sonia wearing a sexy swimsuit.

At first, it is unclear whether Kazuichi is simply objectifying her, or truly cares about her and does not know how to go about expressing that. However, it becomes apparent that he does objectify her, considering he treats her as if she cannot do things for herself because she is a princess. He also stated that he always wanted a beautiful blonde for a girlfriend, which fits Sonia's exterior looks. Sonia dislikes his advances to the point of actively avoiding him and being disappointed that he was not the culprit of the fourth trial. But he would often defend Sonia if somebody accuse her of murder or doubt her alibi and demand that they apologize to her.

After Gundham Tanaka's death, Kazuichi made a speech on how the team must prevail and move forward. Though the speech seemed to move others, it is shown that he made the speech solely to impress Sonia, which she ignored.

In Danganronpa 3/Despair Arc, their relationship seems exactly the same as it was in the Neo World Program.

In the OVA, in Nagito's illusionary world, Sonia seems to actually return Kazuichi's feelings. She agrees for a meeting in a cafeteria. After Soda's death, she imminently goes with her other four classmates to try to avenge his death by trying to kill the World Destroyer. However, her relationship with Kazuichi in the real world seems to have improved as well, as she appears to be waiting for him to board the boat that will take them to the Future Foundation's Headquarters.

In Hope Arc, the finale of Hope's Peak Saga, although Sonia continues to remain uninterested in Kazuichi after the events that occurred in the Neo World Program, she is seen praising him for destroying an army of Monokumas after they arrive to assist the Future Foundation. This brings Kazuichi joy, as it's shown that Sonia now thinks of him as a friend and is at least trying to be nicer to him. Kazuichi is later seen hanging out with Sonia and Gundam on the ship.

“I mean, I only have eyes for Miss Sonia! I've dreamed of going out with a blond lady ever since I was a kid!”
— Kazuichi about his attraction to Sonia in Chapter 2 of Danganronpa 2.

Kazuichi – “How was that, Sonia?! Did you see? Of course you didn't...”
Sonia – “It was quite impressive.”
Kazuichi – “What did you just say?!”
— Sonia finally complimenting Kazuichi in the subbed version of Hope Arc.

The ship started back during Danganronpa 2, about as quickly as Kazuichi's attraction to Sonia. A lot of fans liked the ship and rooted for Kazuichi to eventually win the heart of the girl of his dreams. Those fans were happy with their interaction in Hope Arc and their relationship in Nagito's illusory world in the OVA.

However, the ship is much more divisive. Plenty of fans wish his attraction to Sonia didn't take a vast majority of Kazuichi's screentime, especially since it stole the screentime of his friendship with Hajime Hinata. Some also simply got tired of Kazuichi talking about Sonia most of the time. Those fans often tend to prefer its main rival ship - Sondam. However, there are still those who like both ships and can't decide between them, resulting in Sonsoudam. 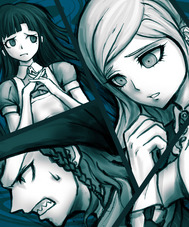 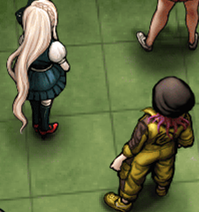 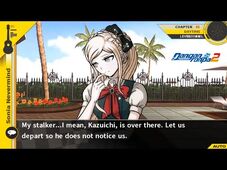 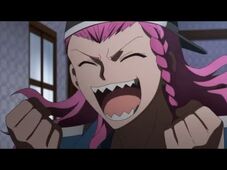 Kazuichi being a simp for a minute and a half straight 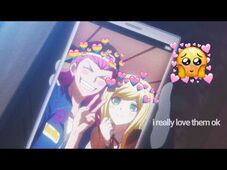 Sonsoudam refers to the ship between the two and Gundham Tanaka