SouShin is the slash ship between Sou Hiyori and Shin Tsukimi from the Your Turn To Die fandom.

Before the Death Game

When Shin was in high school, Sou disguised himself as a student and befriended Shin in order to steal information for his . They apparently spent a lot of time together, and in contrast Sou seems to have only briefly meddled in the other participants' lives.

Shin considered Sou a friend despite being afrd of him and knowing that Sou enjoyed making him uncomfortable.

Sou was killed by Alice Yabusame at some point before the Death Game, around two and a half years before.

In Shin's first trial he was told that he had a 0.0% chance of survival based on countless simulations of the game. This knowledge caused him to break down and assume the identity of Sou Hiyori in an attempt to escape his inevitable death. He started to imitate Sou's manipulative behavior and personality, although to a lesser degree.

Sou is revived as an AI doll and takes part in the Death Game as Floor Master of the 4th and 5th floors. At this point, the player has decided whether Shin or Kanna survived Chapter 2. Sou has different dialogue depending on which one of them is alive.

Both routes include the discovery of the Shin AI, which Sou keeps on a computer and is very possessive of. He also has a journal documenting his interactions with the AI.

When asked about Sou by Sara, the Shin AI states that Sou is his "scary friend" and tells the story of how they met. He mentions how being around Sou makes him feel uneasy and anxious, and that he can tell Sou takes pleasure in having this effect on him, but doesn't seem to think of it as a deterrent to their friendship. He is also aware that Sou infiltrated his school and was not actually a student there.

Shin is visibly upset by Sou's revival and views him as an enemy comparable to Sara, who he despises for her role in Kanna's death. He postpones his plan to murder Sara and cooperates with the rest of the group to fight against Sou, saying they'd beat his expectations. When everyone is investigating the 4th floor, Shin is found staring at a portrait of Sou and Kurumada comments that he's obsessed with him.

Sou admits that he is disappointed with this outcome as he wanted to kill Shin with his own hands since he was going to die anyway. This disturbs the other characters, and Sou states that they don't understand his "affection" towards Shin.

Sou is somewhat frequently interpreted by the fandom as a yandere or yandere-like character. Because of this, many fans interpret his obsession and self-identified "affection" with Shin as a twisted form of romantic love. Conversely, some fans may consider Shin's opinion that Sou is "like a big brother" to imply a strictly platonic relationship, although it is also possible that Shin was not aware of the true nature of his romantic feelings for Sou at the time and misinterpreted them as fraternal. A possibly similar youthful crush hidden behind a sibling-like relationship supporting this possibility could be observed between Kanna Kizuchi and Sara Chidouin, as Kanna seems to exhibit some more romantic admiration for Sara in Chapter 2, Part 1's optional bath scene. Other evidence supporting a romantic reading includes Sou's Shin AI test data book filled with poems, as well as the amount of time Shin spent in Sou's apartment, displaying his own personal belongings on the shelves and being there even after Sou disappeared from his life.

In fanon, Soushin is seen as an abusive relationship due to the implications of their past history. Portrayals tend to depict Sou being possessive of Shin, cruelly seeking pleasure out of making him feel uneasy. Shin in the relationship, especially in pre-game portrayals, is seen as someone who latched onto Sou, despite the mistreatment and discomfort he felt when he was with him. The chemistry between the two characters is one of the highlights of the ship, as well as the vagueness of their relationship so far in canon. It allows for many scenarios to be explored through fanon content.

“I think it was in high school... I met him at school, and we started talking... But whenever I looked in his eyes... I felt really restless... I was so scared, I started sweating, I got anxious... He really seemed to enjoy seeing me like that...”
— Shin talking about his friendship with Sou.

“Every day, like we were playing at a secret base, we'd assemble at his house and mess with computers... When Midori suddenly disappeared... I was left with a confusing feeling between happy relief and loneliness at losing a friend.”
— Shin talking about when Sou disappeared.
“This is Midori we're talking about... The time limit must be impossibly tight. Heh... Let's beat his expectations.”
— Shin talking with Sara about saving Keiji in the coffin and Sou's schemes. 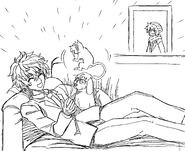