Spicecream is the femslash ship between Cinder Fall and Neopolitan from the RWBY fandom.

Neo and Cinder are first seen together in volume 3 during the Vytal Festival tournament. The two are seen pretending to be a team from Haven Academy alongside Emerald and Mercury. They are then seen together in the doubles round completly overpowering their opponents and eventually winning the match. They then work together again in chapter 7 with Emerald to get Mercury out of Amity Colosseum and frame Yang for his injury. Cinder then praises Neo for acting her "role" perfectly with Neo smiling in return, the four then take off in the ship.

They then don't see each other again until volume 6 chapter 5 where it turns out Neo had been following and tracking down Cinder all this time. She then confronts her and begins to fight her with Cinder reluctantly participating in the fight. During the fight, Cinder tries to tell Neo that she isn't responsible for Torchwick's death and that ruby was to blame. Neo doesn't listen to her and continues to fight her until Cinder uses her maiden powers to make Neo stop. She then takes Neo to the bottom of the vault and manages to convince her that Ruby is the one responsible for Roman's death and then invites Neo to work with her to kill Ruby, since Cinder also has a grudge against her as well. Neo then smiles and they shake hands as they agree to become partners.

In chapter 13, Neo manages to disguise a Mistralian airship as a Manta airship with her semblance. This greatly impresses Cinder and tells her she believes in destiny, while the two smile evily and the doors close. In volume 7 episode 9 it is revealed that Cinder and Neo have made it to Atlas and neo disguised as a waitress had infilltrated the schnee manor. She then returns to Cinder and she asks her if she found what they were looking for, to which Neo smiles smugly. She then gets annoyed at Cinder when she tells her they can't kill Ruby yet.

Spicecream is a rarepair in the RWBY fandom, however is has gained more interest now that Cinder and Neo are working directly together. Shippers are drawn to their complicated relationship where it is uncertain if the two truly trust each other, as well as more simple troupes like their extreme height difference. There are also those who hope for a possible redemption of some kind. Shippers also joked that the two boarded a literal ship together in the finale of Volume 6. It has a decent sized fanbase on tumblr. 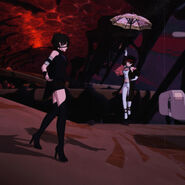