Spideybug is the het ship between Peter Parker and Marinette Dupain-Cheng from the Marvel comics and Miraculous Ladybug fandoms.

As Marinette and Peter are from different series, even though both of their home universes have superheroes and magic, they have never met in canon. Even though a few Spider-Man references were made in the Miraculous Ladybug series through Marinette and the people she knows.

While the two have never met, they do have a few similarities that can serve as common ground for them to stand on. Both of their superhero costumes are red and have bug themes, a spider and a ladybug, swing all across their home cities to get around through their web-shooters and yo-yo. Just as Peter is good at making his own gadgets to help him on the filed, Marinette is also shown to be good with her hands when it comes to bringing her clothes designs to life and combining her Lucky Charm with the random items around her, along with building a special box to keep her secrets in her diary safe. Peter designing and making his Spider-Man suits also reveals that he too has clothes making skills. As well as the two knowing the struggles of balancing their two lives and keeping their hero lives a secret from the ones they love, along with their hero duties getting in the way of their schooling. Even though Ladybug has had Cat Noir by her side since day one, there have been times have she has to fight battles on her own, just as Spider-Man has protected his home city on his own before he begins to ally himself with other superheroes. Along with him being acquainted with someone with a black cat alter ego-themed who is in love him, like the way Cat Noir is in love with Ladybug. Just as Ladybug as animal-theme allies and foes, Spider-Man has his own fair share of friends and enemies who have animal-like themes.

Even though never met the past Ladybugs before her and only had her future self talk to her through Burrow, the thought of them gives her comfort. Just as Spider-Man meeting his many dimensional counterparts helps him to feel less alone of being the only Spider-Man, and one of his alternate dimension counterparts is from a future universe. When it comes to their friends, Peter and Marinette are good friends with the wealthy sons of the men who turn out of be one of their enemies, who are obsessed with the young heroes. To help keep their masked alter egos a secret, as well as employment and friendship by making everyone think that their civilian and hero selves are two two different people, Peter takes pictures of Spider-Man for Daily Bugle, just as Marinette helps Alya with her Ladyblog and has used the Fox Miraculous' illusion powers to create an illusion of her civilian self while the real Marinette is in her Ladybug form. Before the two became heroes, they were easy targets for bullies and didn't have much confidence in themselves, until their times as Spider-Man and Ladybug gave them the chance to become, braver, stranger and even wiser.

In the first TV special film of the Miraculous World series Marinette visits New York, the US city that Spider-Man protects and later teams up with the Avengers. Just as Ladybug's time in New York has her teaming up with two young members of the United Heroez. When it comes to their bullies, Flash Thompson and Chloé Bourgeois, Peter and Marinette believed that they'll always be cruel people, until they became heroes themselves and the two begin to see them in a new kinder light. Even though Peter didn't believe in magic, until he meets magic wielding heroes, he solved his problems with science. Ladybug has also used what she has learned in science to defeat some of her akumatized foes. Some of the akumatized villains she has faced were her friends who get placed until Hawk Moth's control, there have also been times when Peter is forced to fight his friends and allies when they too have been placed under someone's control.

Spideybug is one of the well liked ships of the ML/Marvel crossover fandom. Because of the many versions there are of Peter, the Marvel fandom used in the ship jumps between the comics, cartoons, video games and even the Marvel Cinematic Universe, it has the ship not limiting itself to one single version of Peter Parker/Spider-Man. On AO3, the ship has 37 fanfic, along with it having reasonable size fanbases on Fanfiction.net, Deviantart, Tumblr and YouTube.

The famous Spider-Man kiss scene being referenced in season one of Miraculous Ladybug has inspired fans to draw or write about them kissing one another in that way. While due to Spider-Man's web swinging being similar to one of the ways that Ladybug uses her yo-yo, fans like to draw them web yo-yo swinging together. Their similarities have also got fans to cast the two as one another in AUs of their fandoms, or simply draw the two swapping costumes and powers, fur fun.

One Deviantart, a user known as TiPophotorequester has done a lot of fan art on the two young heroes, as well as taking requests that relate to the ship. MegS-ILS is one of the users has has asked TiPophotorequester Spideybug requests more than once. ArielleLyon has also done a few Spiderbug request drawings. Zyule as even done their fair share of edits of Ladybug with a few different versions of Peter/Spider-Man. As for kongzillarex619 on the other hands, he likes to feature the two as father and daughter; while Lucina of Fire Emblem serves as the wife and mother of the crossover fanon family.

Even though some have paired Cat Noir with Black Cat, it hasn't stooped fans from rivalling Spideybug with Adrienette. There have also been fans who prefer to ship Marinette with either Miles or Gwen; or to only have Spider-Man and Ladybug as friends. 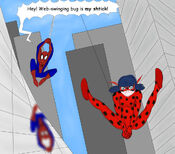 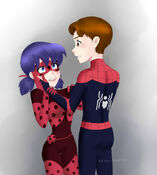