Best Friends; crush on Wade's side

Spideypool, also known as Spider-pool, is the slash ship between Peter Parker and Wade Wilson from the Marvel fandom.

Their homoerotic friendship has been alluded to many times in the Marvel Universe, and the huge fan culture surrounding the two characters led to their own spinoff comic series being released in 2016 called "Spider-Man/Deadpool" (a reference to the Spideypool slash ship).

Whilst Deadpool is pansexual in canon and has Spider-Man listed on the 'free pass' list he agreed with his wife, Shiklah, Spider-Man doesn't exactly return his feelings.

In the episode 'Ultimate Deadpool' of the 'Ultimate Spider-Man' cartoon series, for example, Spider-Man is repeatedly frustrated and angered by the antics of the merc with a mouth. Despite this, most people regard the two as tentative friends.

Deadpool hops on top of the car Peter is in and throws him out and over the bridge, as he confronts Ken Ellis. Peter quickly changes into his Spider-Man outfit as he falls and get’s back up on the bridge. Spider-Man traps the car in his web and Wade hops out. He calls Spider-Man adorable which just makes Spidey angry. Spidey then attacks Deadpool and the two fight on the bridge.

Spidey finds Wade in New York fighting dinosaurs. He asks Wade what he did, and Wade says it was an accident, but he definitely had nothing to do with the symbiote. He asks Spidey what kind of powers the symbiotes have. Spidey tells him as well as the best ways of defeating them. Wade starts going crazy on the dinosaurs, which annoys Spidey since he could accidently hurt civilians. He decides that they need to think of the bigger picture. He tells Wade to stay put as he swings around looking for a solution.

Canonball – “Everything is so wrong. If even Spider-Man could be corrupted...”
Wade – “Hey, don't give that guy too much credit. He was gonna suck the marrow out of my bones.”
— Cable & Deadpool #15

Most shipping was originally based on Wade being a major fan of Peter's superhero identity, Spider-Man. His hero worship of the other causes him to want to be a better person. Shippers were also drawn to their similar senses of humor, since they both have tendency to sass and quip. Spider-Man will also occasionally break the fourth wall, but not as much as Deadpool.

The ships main rival is Cablepool, although the former did have a drop in popularity due to a lack of interactions between the two throughout the years. Despite this, there are very few ship wars between the fandoms. The Spideypool ship was able to gain traction as the start happened during the height of social media in fandom, making it easier for fans to connect and the ship to spread.

Deadpool is willing to open up to Spiderman, while Spiderman is very understanding towards Deadpool. Many fans believe that the two would make good parents together.

Shippers who base many of their works on the film adaptations, typically will tag that they are writing about a different version of Spider-Man than the one in the MCU. Typically the one portrayed by Andrew Garfield, in The Amazing Spider-Man duology. Some will also use Tobey Maguire's Spiderman. Many fans had been shipping the Garfield version of Peter with Reynolds version of Wade before Holland was cast in the MCU, as well as before the Deadpool movie, due to his casting in X-Men Origins.

When shippers made fan video's the editors would gather clips from a variety of Andrew Garfield and Ryan Reynolds films and would cut them together to make trailers or cute videos that made it seem like the two would talk to one another. Reynolds was always chosen as the casting choice for Deadpool since his scene as the character is considered one of the only good things from X-Men Origins Wolverine. Fan videos will also use their interaction's from the comics as well as from the episode of Ultimate Spider-Man, "Ultimate Deadpool". 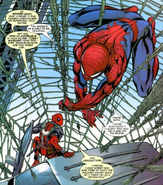 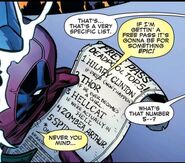 Are They Gay? - Deadpool and Spider-Man (Spideypool)

Is Deadpool Too Old For Spider-Man? - Spideypool Update

The Spider-Verse Gave Us Spideypool?