Friends (only in Kingdom Hearts)

Squaerith is the het ship between Squall Leonhart and Aerith Gainsborough from the Final Fantasy and Kingdom Hearts fandoms.

Squall and Aerith are also two of the few Final Fantasy characters to be included in the Kingdom Hearts series, as they both appear in the first game of the series and Kingdom Hearts II, along in the DLC pack Kingdom Hearts III: Remind. While Kingdom Hearts: Chain of Memories has memory versions of them. The KH universe has them haling from the FF world Hollow Bastion/Radiant Garden, where it was one of the many worlds to fall into darkness when it was attacked by Maleficent, which is how Squall, who has changed his name to Leon in an attempt to amend for his mistakes of out being able to save his loved ones, had ended up on Traverse Town with Aerith, Yuffie and Cid, who had raised the two, along with Yuffie, after they lost their home. Over the years Aerith has helped Leon in his resistant work, as he travels to worlds to worlds in his gummi-ship and brings refugees back to Traverse Town. Where they finally meet the Keyblade wielder that is said to fix everything, Sora, when his home world was also taken by the darkness. Before Sora resealed Kingdom Hearts, Leon, Aerith and the others returned to Hollow Bastion, so they can there to reclaim their home after the darkness swallowed worlds revert back to normal.

A year later, in the event of Kingdom Hearts II, Leon, Aerith and their resident allies continue to fight the Heartless, along with preparing for the battle of the 1000,000 Heartless invasion. After Leon and Sora discovered the existence of Space Paranoids, Aerith insisted in keeping an eye on the computer and room that brought Sora and his two friends to it; but Leon wasn't so sure about it until Aerith gave him a glare that persuaded him to her way. Once the MCP was defeated, Tron shows everyone a pleasing sight of when their city was first built; in which reminds them of its true name. Radiant Garden. After Sora disappears at the end of Kingdom Hearts III, Kingdom Hearts III: Remind shows Leon and Aerith, along with Yuffie and Cid, helping Riku in their search for him as they discus what they and everyone else are doing what they can to find Sora on their ends.

While in both of their Final Fantasy games, Squall and Aerith have their own flashback scenes of their childhood, along with the people who took care of them as both Squall and Aerith are orphans, and being in a prison cell before they and their parties escape from the place they were being held at, before heading out to their next location that needed their help. Also with both of them having one party member that uses their fists as their weapon of choice.

The ship is mainly focused on their Kingdom Hearts counterparts, since it is a canon Final Fantasy crossover related game that has a version of the two know each other as friends and allies, and possibly brother and sister-like figures. Since the manga of the first Kingdom Hearts game has Cid telling Sora that he had raised the two, along with Yuffie, when they were quite young. Which is why a lot of MMD KH art comics commonly has them as a couple, along with sometimes having them as Sora's parents in fanon. While Cloud Strife also being apart of the Kingdom Hearts universe, along with Squall/Leon's KH design hinting that Rinoa might also be part of it, some KH-FF fans have the ship rival with Clerith and Squinoa. There have even been fans who poly ship the two with Cloud.

On AO3 they have 19 fanfics in total, 12 on the Final Fantasy universes while the fanfics on their Kingdom Hearts counterparts are only 7. 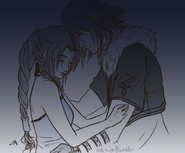 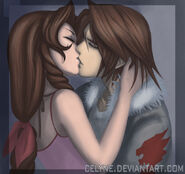 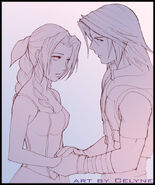