Squinoa is the het ship between Squall Leonhart and Rinoa Heartily from the Final Fantasy fandom.

Squall first meets Rinoa at the SeeD inauguration party at Balamb Garden, where she forces him to dance with her when she noticed Squall on his own. After they did so and enjoyed the dance they shared with one another, Rinoa decides to have Squall as one of the SeeD mercenaries that she was tasked to employ for the Forest Owls. A group of freedom fights that Rinoa is part of and gets Squall, along with a few others from Squall's group, to help them in their cause.

Through the use of Kingdom Hearts model renders for fan MMD art, fans are able to create a KH version of Rinoa so they add her in the fanon universe of KH with Squall, who had changed his name to Leon in the canon KH series. Along with using child model renders of Sora, Riku and Kairi to make KH children versions of the two, in both FF and KH fanon MMD art work. Fans also have Rinoa by Squall/Leon's side in their FF/KH fanfics, where she is commonly seen as a member of his resistant group against the Heartless. 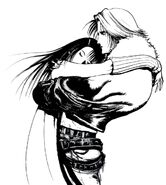