“Always a pleasure to see you, Lucy.”
— Constantine.

Starblazer is the slash ship between John Constantine and Lucifer Morningstar from the DC Comics and Arrowverse fandoms.

Although there were fans who shipped them before Crisis, and had wanted them to meet at some point, the ship took off following Lucifer's cameo in the Crisis crossover. Most speculated that the way that Lucifer and Constantine knew each other was because they hooked up. Or, had hooked up when Constantine was helping Lucifer with Maze. Many fans hoped that Lucifer would appear on Legends and confirm this. But with Lucifer over and Constantine not allowed to be used in the Arrowverse anymore, many fans gave up hope for this happening.

Fics of the two are most often NSFW. Mostly playing with the idea that they hooked up the last time they med. 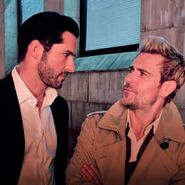