• First Girl Wins — Peggy was the first real love for Steve, and, despite the very long way to get there, they get married in the end.
• Happily Married
• The Lost Lenore — For Peggy when Steve goes into the ice. For Steve when he wakes up.
• Love At First Sight — Steve liked her from the moment she punched out a sexist soldier.
• Office Romance
• Official Couple
• One True Love
• Tragic Keepsake — Steve's compass with Peggy's picture. Peggy keeps the picture of Steve before his super soldier transformation.

Steggy is the het ship between Steve and Peggy from the Marvel Cinematic Universe fandom.

Peggy was assigned to Colonel Chester Phillips's training base at Camp Lehigh where she met potential candidates for Project Rebirth, including Steve. Peggy began to admire Steve throughout his training as he emerged smarter and braver than the other candidates, such as knocking down a flagpole rather than try to climb it to retrieve a flag or instinctively diving on a dummy grenade to protect others. Once he was chosen for Project Rebirth, she escorted him to the Strategic Scientific Reserve Brooklyn Facility where they discussed their struggles to gain respect in the war.

Once the procedure had begun, Steve began to scream to pain. Hearing his screams, Peggy tried to tell Abraham Erskine to stop the process, but Steve insisted it continues. After the procedure, Rogers was successfully transformed, growing over a foot in height and gaining large muscles. Peggy was one of the first to greet him after his transformation and provided him with a new shirt, not before attempting to touch his newly muscled figure. After Heinz Kruger attacked and stole a vial of the Super Soldier Serum, Peggy gave chase and attempted to shoot him as he fled in a car. Steve pushed her out of the way just before Kruger hit her with the car, though Peggy insisted she could have killed him.

After the attack, Peggy was sent overseas, while Steve stayed behind and joined the United Service Organization as the costumed Captain America. His show became a hit, and he was eventually sent to Italy to perform for the soldiers. After a disastrous show, Peggy greeted Steve, and the two talked, discussing Steve's role in the war. He learned from her that the unit of his friend, Bucky Barnes, had been captured by HYDRA, and he was either dead or imprisoned. With Phillips unwilling to risk a rescue mission, Steve set out on his own to rescue his friend. Peggy offered her help, convincing Howard Stark to fly them to the HYDRA weapons facility where the prisoners were being held.

When Steve returned days later with the rescued prisoners, Peggy remarked that he was late. Steve then showed her his destroyed radio, telling her that he couldn't call his ride. The two later met a bar, where he was putting together a team called the Howling Commandos. She informed Steve that Howard wanted to meet him the next morning to test out new equipment. Bucky tried to flirt with her, but she didn't spare him a glance, keeping her eyes on Steve only.

The next morning, while Steve waited for Howard, a soldier named Lorraine kissed him. Peggy became furious when she saw, though Steve tried to convince her that it wasn't what it looked like. He accused her of having a relationship with Howard, and she responded with annoyance. She dropped Steve off with Howard. When she came to collect him later, she found him trying out the new shield Howard had provided for him. Steve asked her what she thought of it, and without warning, she picked up a gun and fired at him, claiming to be simply testing the shield. She left, leaving Steve and Howard shocked and impressed.

Steve kept a picture of her while he battled HYDRA with the Howling Commandos, which Peggy discovered while watching a newsreel of the team. After Bucky's supposed death, Peggy found Steve in the ruins of a bar, trying and failing to get drunk. She comforted him, telling him that Bucky's death wasn't his fault. Peggy joined the attack on the final HYDRA base. She shot a HYDRA soldier who was keeping him cornered, saving him. Steve jokingly told her she was late, calling back to their reunion after his first mission. She had to remind him to continue chasing after Johann Schmidt. He was unable to catch up to Schmidt, who had boarded his plane and was driving it out of the hangar. Phillips and Peggy drove up beside him in Schmidt's car and told him to get in. They caught up to the plane, and before Steve boarded, Peggy pulled him into their first and only kiss. Steve then boarded.

Steve and Schmidt fought inside the plane. Schmidt was defeated when he touched the Tesseract that he used to power the plane, transporting him to the planet Vormir. Steve then took control of the plane. As it was full of bombs, and with no safe landing site, Steve knew that he needed to crash the plane into the Arctic to protect the world. Peggy begged him to reconsider, but Steve held fast in his decision. Unable to convince Steve otherwise, Peggy stayed on comms with him until he crashed. When it did, the communication cut to static, and all Peggy could do was cry.

Peggy was still alive. He considered calling her but ultimately decided against it.

Steve visited Peggy at the retirement home where she lived. They discussed Steve's new life. She was lucid at first, but due to her Alzheimer's disease, she suddenly completely forgot their conversation, acting as if this was the first time she'd seen Steve since 1945.

Peggy appeared in the nightmare vision Wanda induced in Steve. She told him that the war was over and that they could go home.

Peggy died in her sleep. Steve was devastated to receive the news, and abruptly left the conversation about the Sokovia Accords to mourn in private. He and Sam Wilson flew to London to attend her funeral, where Steve served as a pallbearer.

This section is in need of major improvement. Please help improve this article by editing it. Steve looks at a picture of Peggy while on a ship before going to confront Thanos.

Steve and Tony travelled back in time to the S.H.I.E.L.D facility in 1970 to get the tesseract and more Pym particles after failing their original mission. To avoid being caught Steve has in an office and sees a framed picture of younger him on the desk. He then realizes that he is in Peggy's offices and sees her talking to someone through a window. Steve time travelled back, originally to return the infinity stones to their right timeline but, ended up marrying Peggy and coming back meeting Sam and Bucky as an old retired man. They then finally get their dance together. The directors of the film have also confirmed that the father of Peggy's kids in Captain America: Civil War is Steve.

Peggy had to convince herself and Howard Stark that Steve was not coming back and that they needed to move on. Peggy later dumped a vial of Steve's blood in the East River while crying and whispering Goodbye, my darling.It was revealed that Peggy had feelings for Steve even before the Super Soldier Serum. Peggy carried a picture of the skinnier Steve with her.

In the main Marvel universe, Peggy joined the French Resistance during World War II and became a skilled fighter, serving in several operations alongside Steve. The two fell in love, but an exploding shell gave her amnesia, and she was sent to live with her parents in Virginia. She mourned for Steve for years after his supposed death. She later joined S.H.I.E.L.D. When Steve reemerged for the first time, Peggy initially still had feelings for him, but the two decided to remain close friends.

In Captain America Vol 5 #10, Earth-58163 is temporarily merged with Earth-616. In this universe, Steve Rogers and Peggy Carter marry but later divorced for unknown reasons. Their relationship is shown not to have worked.

In this pocket universe, Peggy Carter appears and mentions having worked with Captain America in the war but no romance develops. She later marries Richard Barnes.

The events of Captain America's supposed death still occurs. In this universe, Peggy still thinks about Captain America and tells his stories to Shannon Carter.

Steve – “I guess I just don't know why you'd want to join the army if you're a beautiful dame. Or, a beautiful—woman. An agent. Not a dame. You are beautiful, but—”
Peggy – “You have no idea how to talk to a woman, do you?”
Steve – “I think this is the longest conversation I've had with one.”
— Captain America: The First Avenger

Steve – “You told me you thought I was meant for more than this. Did you mean that?”
Peggy – “Every word.”
— Captain America: The First Avenger

In the fandom, Steggy is a popular ship with main fans of the Marvel Cinematic Universe. Following the Marvel's Agent Carter series, many other ships with Agent Carter such as Cartinelli, PeggySous and Carter/Jarvis have come to the fore. Common fanart and fanfiction depict the events of Carter and Rogers' dance which they organized before his apparent death. 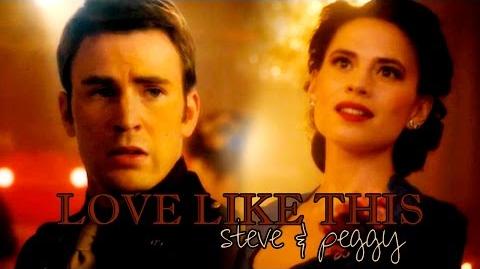 Retrieved from "https://shipping.fandom.com/wiki/Steggy?oldid=188589"
Community content is available under CC-BY-SA unless otherwise noted.