Team Sticks (in one epsiode)

Sticmy is the femslash ship between Sticks and Amy from the Sonic Boom fandom.

Amy, Sonic, Tails, and Knuckles first met Sticks in the unnamed village. The badger taught them how to find Shinies on hidden locations around the island. Found Shinies can be traded to her for princess crowns.

After Lyric’s defeat, Amy gave Sticks a robot part, which is most likely the last Shiny in the game given the player had collected the rest. The badger thanked the hedgehog for the “spatula” that she had been looking for and walked away.

Sticks, with the rest of Team Sonic, rescued Amy in Lyric’s airship. After Lyric’s second defeat, Sticks asked Amy why they, including Shadow), could not kick Lyric out of his airship altogether, which the badger answered her own question with a speech about teamwork.

In “Traslate This”, both Sticks and Amy are concerned with Tails’ latest invention, citing exposing secrets and thinking the opposite. At the end of the episode, despite Amy appreciating Sonic’s well-being for her, Sticks throws the robot into the sea after it reveals her negative side.

In “Into the Wilderness”, Sticks formed a pair team with Amy and taught her survival skills. Though Amy struggled, she was able to prove her worth for the upcoming race. They competed against Sonic and Knuckles, who were badly unprepared. Eventually, the girls found a silo where they launched a missile and dropped to the goal with their makeshift parachutes, winning the race.

In “Battle of the Boy Bands”, Amy persuaded Sticks to join in the Beaver fever bandwagon. Both girls attended a Justin Beaver signing with Sonic, Tails, and Knuckles standing on the side. They later attended a concert in which Dreamboat Express challenged the beaver to a sing-off. Amy commented positively on Dreamboat Express, with Sticks wishing she would meet them someday. After Justin sang a high note to impress the fangirls, Tails found the counter-frequency, prompting Sonic to play on his guitar using that same frequency towards Justin. As a result, Amy, Sticks, Perci, Zooey, and other fangirls under control were freed. The entire audience then cheered on the trio under a new name, Dude-itude.

In “Sticks and Amy’s Excellent Staycation”, they have a girls’ weekend. After Dude-itude left on their Dude-Mobile, Amy set up a Sonic doll on a pole to keep Dr. Eggman occupied for the day. They tried throwing mud and knitting, but neither are happy with each other’s hobbies. They went to the spa, where Amy got a massage and Sticks a mud bath. The badger ate the cucumbers, not long before Eggman called for Sonic in the village. The girls came out of the spa and proceeded to destroy some of his Badniks. Just when they succeeded, the girls were interrupted by the arrival of Belinda riding on her husband’s mech suit. Nonetheless, Amy and Sticks were able to drive her away, calling that very day the “best girls’ weekend ever”. That evening, they passed by Eggman again, who brought the Sonic doll to his lair for research.

In Mario & Sonic at the Rio 2016 Olympic Games, Sticks appears alongside the regular version of Amy. They also appear as Speed Type characters in Sonic Runners.

Sticks and two side characters from her own Zone entered Prime Sonic’s zone in Worlds Unite to join Amy, her friends, and fellow Freedom Fighters to take on the Eggman-Sigma alliance.

This pairing is fairly popular, with a small but growing fanbase. Those who ship the pair appreciate their friendship in the cartoon and games since Shattered Crystal. Others want to pair either one with another female who is not a side character, like Perci, Zooey, or those outside of Sonic Boom, such examples being Cream, Cosmo, and Marine. Like other femslash ships in the Sonic fandom, this one is those less-common in terms of fan-made content, superseded by the two pairings involving Sonic (Sonicks and Sonamy) and Tails (Tailicks and Tailamy).

It is the second most-written ship for Sticks in Archive of Our Own, with ten works as of December 2021. 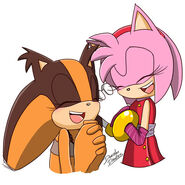 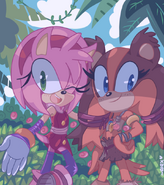