Strawberry Shortcake is the femslash ship between Ruby Rose and Neopolitan from the RWBY fandom.

Neo and Ruby first meet each other in volume 2 when Neo manages to rescue Roman with her Semblance and escape. Later, in volume 3 when Ruby sneaks onto a ship, Neo texts Roman a message with Ruby's picture and the text "Guess who?" on the bottom. They both eventually go onto the top of the ship to fight Ruby. During the fight between Ruby and Neo, Neo is easily able to overpower Ruby.

At one point even causing her to hang off the edge of the ship. Just when Neo is about to kill Ruby though, she saves herself by pressing Neo's umbrella open and this causes Neo to fly off the airship. In volume 6 chapter 6, After finding Cinder, Neo is convinced by her that Ruby is the one who killed Roman, promising her that they both want her dead. This prompts Neo to team up with the Cinder to hunt down and kill Ruby, causing a ceasefire.

Neo then infiltrates Atlas with Cinder in volume 7. Later that night, Cinder orders Neo to take the Relic of Knowledge from Oscar. This doesn't sit well with Neo and she immediately became upset and took on Ruby's appearance to illustrate her desire to get her revenge and kill Ruby.

In volume 8 chapter 5 during her fight against Maria, Maria asks her what she wants. Neo then transforms into Ruby to illustrate her answer. In Volume 8 Chapter 10, Neo attempts to extort Cinder by threatening to keep the lamp unless Cinder gives Neo what she owes her (Ruby). In Chapter 13, Cinder gives Neo the opening she needs to sneak up on Ruby, but her attack is interrupted by Yang. Neo then continues her attack on Ruby, and the two use their speed to keep up with each other and stay ahead of Blake. Their fight continues into Chapter 14, where Neo manages to disarm Ruby. Ruby tricks Neo into attacking her, then uses her Semblance to shove Neo off the pathway so she can retrieve the Staff of Creation. Cinder then blasts Ruby off the path, breaking her Aura, and Ruby grabs onto Neo's ankle. Neo doesn't attempt to shake her off, or even look angry with Ruby. Cinder then knocks both girls off the path and they fall together until Ruby is briefly rescued by Blake.

Strawberry Shortcake is a rarepair in the RWBY fandom. Mainly because the two are enemies and Neo wasn't present at all in either volume 4 or 5 of RWBY. It recently regrew in popularity in volume 6 when Neo reappeared with a newfound hatred of Ruby. The ship jumped up in popularity again after the two got a rematch and were thrown into the void together by Cinder. Fans are hoping for Neo's redemption during Volume 9 and more interactions between Ruby and Neo. It has a small fanbase on tumblr. 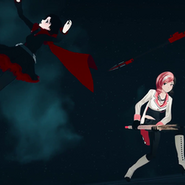