Tecchou and Jouno are both members of the Hunting Dogs, working under Fukuchi and for the justice of the world. Though they have an antagonistic relationship with each other, they work extremely well together and offset each other's ablities.

Their debut was in Chapter 60, along with the other members of the Hunting Dogs. Tecchou slices open the door of his transportation, believing that he opened the automatic door himself. Jouno mocks him for that idea and asks how long he'll hold the dramatic pose he is in. Tecchou calmly explains that he'll cut down anything in his way while Jouno humors him and exasperatedly tells him to go away.

They are both startled by Teruko shouting through her vessel, with matching expressions of worry or concern. Later, Jouno and Fukuchi are seen deliberating where the Detective Agency may be. Tecchou is apparently thinking about eating pudding and Jouno monologues internally that he hates the group.

In the next chapter, Tecchou and Jouno are partnered together by Fukuchi and are sent to capture the Armed Detective Agency. Two two dash off at extreme speeds, leaving the military guards astounded. They continue their banter in the forest, where Jouno voices his complaints about Tecchou cutting down every single tree in their way. He protests the stupid idea and bluntly says that he hates him because his soul had no artistry. At this point, Jouno mentions how Tecchou will only eat foods that are the same color together, with agreement from the other. Sighing with a completely fed-up expression, he wishes death upon the ravenette.

Continuing to criticize the latter's weaknesses, Jouno goes on about how he's useless except when facing the enemy, and that his heartbeat and breathing are incredibly annoying and should stop doing so at Tecchou's nearest inconvenience. Jouno lies on the ground to scout for any hints of the Detective Agency. Behind him, Tecchou is holding his breath, likely regarding what his partner had said. Towards the end of Chapter 61, Tecchou begins eating a hard-boiled egg with the shell still attached in order to "build his strength", which Jouno voices his disgust against.

Afterwards, the two attack the Armed Detective Agency together, and Kunikida even goes on to note the ability level of the Hunting Dogs. Jouno calls out for Tecchou to make Yosano's death quick, but before he can strike, his arm is pierced by a bullet from above. Jouno searches the skies for the culprit, only to find Chūya sending down thousands of bullets with his Gravitational Manipulation. Tecchou, losing his composure for once, stabs his sword through the side of the chopper and grabs onto Kenji.

Their next interaction is featured when Jouno welcomes Tachihara back and gives him the "Disciplinarian Role". He points towards a wailing Teruko and Tecchou who is exercising. During their meeting together, as Tachihara briefs them about the 'Decay of Angels', Tecchou is seen doing push-ups while in a meeting next to Jouno's chair. Getting annoyed by Tecchou's workout, Jouno steps on his head and says that muscle training is banned during meetings. Tecchou stays unperturbed, even going as far as to describe Jouno's weight as "just right".

Later on in the same chapter, they are shown entering Café Uzumaki together to gather information while arguing about who could be the "Greatest Hunting Dog" out of the two of them. Jouno reasons that because the Hunting Dogs is an organization based on investigation and capture, he is the one most skilled at them and should therefore be the strongest Hunting Dog. Tecchou watches him with a bemused expression for a moment before letting out a slight laugh (notably one of the only scenes where Tecchou smiles). Jouno responds darkly, threatening Tecchou with imminent death. They take a seat at the bar with Tecchou ordering a soy sauce latte, which clearly annoys Jouno. Jouno proposes a battle: Which person can find out the location of the Detective Agency first? Tecchou agrees to the challenge casually, and Jouno immediately begins interrogating the barista.

Quickly, the simple questioning turns into Jouno taunting him with his own lies. Just as he is about to make the poor barista crack, Tecchou stabs Jouno's foot with his sword. Jouno shouts out in pain, questioning his motives. Tecchou reprimands him 'on the commander's behalf' and scolds his tendency to torment people. Afterwards, Tecchou vows to the barista that Lucy will receive no charges and that the Armed Detective Agency will receive a fair trial. An agitated Jouno asks what he's doing, attempting to stop him, but concedes to Tecchou's fair proposition in the end. He internally wonders if he lost the interrogation competition in the end.

They have a short interaction during the Vampire Infection arc, where Tecchou suggests that the source of the infection is the Armed Detective Agency, being the timing. Tecchou's speech triggers Jouno to sarcastically compliment him for his idea, saying that he'll mark Tecchou's being reasonable for once on his calendar. Tecchou is seemingly unfazed by this.

After Jouno bumps into Aya, he begins threatening her life and questioning her, asking her if she would like to "become a part of his entertainment", However, Tecchou intervenes, telling him to stop by lengthening his sword and hitting Jouno. Tecchou chastises him for using innocent people as pleasure, in which the white-haired man remarks angrily that Tecchou could've just used his voice instead of stabbing him every single time. Jouno lies that he was only looking for cooperation, in which Tecchou disagrees and say he should only do such after the girl had signed a consent form for Judicial Transactions. Ticked off, Jouno provokes Tecchou into settling the debate by blade, but they're both stopped by Fukuchi.

Tecchou encounters Kenji in the airport, and the first thing he asks him is "Where's Jouno?" Kenji cheerfully offers to help him find Jouno, and Tecchou, taken aback, smiles and thanks him. Tecchou suddenly pauses because he remembers that Jouno was likely ambushed by a vampire when talking with Fukuchi. He seriously states that he needs to find Jouno, and for that, he will take the fastest option possible.

When Kenji refuses to comply with his demands, he attacks the agency boy with all of his strength. Tecchou starts explaining the type of person Jouno is to Kenji, without stopping his onslaught. He gives Kenji one more time to confess where Jouno is.

Kenji approaches a wounded Tecchou as if preparing to deliver the final blow. Instead of fighting anymore, Tecchou tells him to kill him. He thinks about Jouno with a clear mind, realizing that Jouno would never tell him to abandon the mission and look for him.

Tecchou – “Don't use people for your enjoyment.”
Jouno – “Then just use your voice instead! Stop stabbing me in the ass every single time!”
— Chapter 92

“I will rescue Jouno. For that, I will take the fastest measure possible”
— Tecchou to Kenji (Chapter 99)

“Everyone misunderstands Jouno. Jouno is cold but In his core, he is a hero who despises violence and protects the weak. ”
— Tecchou explaining Jouno to Kenji (Chapter 100)

“For just five minutes, I will place Jouno above justice”
— Tecchou (Chapter 100)

Like most ships in the Bungo Stray Dogs fanbase, it's most popular for its "Enemies to Lovers" or "Opposites Attract" appeal, much like the more popular ships such as Soukoku or Shin Soukoku. There is one character with a smarter mind and a calm composition, while the other one is more battle-oriented and is good in combat.

They are both members of the Hunting Dogs, and commonly get paired together in missions. They have likely known each other for an extended amount of time as well. Jouno claims to be the "Strongest Hunting Dog", in terms of his expertise in catching criminals and investigating, but the manga cites that Tecchou is actually the strongest soldier, in terms of pure fighting ability. Both of them seem to hold no hesitation in actively harming the other, as Jouno commonly threatens Tecchou with death, and Tecchou is quick to attack Jouno if he is acting too sadistic.

A theory for the ship is that working alongside Tecchou for so long has rubbed off on Jouno, and was the reason that Jouno ended up defying Fukuchi. Jouno is typically a pessimistic and sadistic person, but when Fukuchi offered a him place in the Decay of Angels, the thought of receiving praise overshadowed his desire to hear 'pain'. After hearing Tecchou's part-speech about Jouno, fans take this as proof of how Tecchou truly harbors feelings for Jouno, despite how they act towards each other on the surface.

The ship itself doesn't have many other contenders, but it doesn't have an excess of content either because they are more newly-introduced manga characters. Most fanfictions are AU's or set before the Hunting Dogs arc because of Jouno's death.But it's also noticeable that it is the most popular ship for both Tecchou and Jouno on the Bungo Stray Dogs AO3 tag, only having 80+ works. 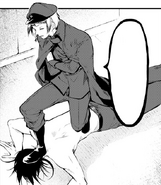 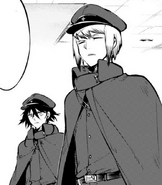 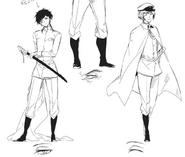 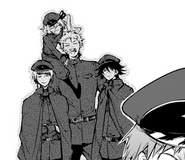