SugaKage is the slash ship between Kōshi Sugawara and Tobio Kageyama from the Haikyu!! fandom.

Sugawara is the vice-captain and substitute setter for Karasuno High. Kageyama replaced Suga and became the official setter for the team. Suga teaches Kageyama the things that he needs to know to get better a setter. Like when Kageyama and Hinata were working on the quick attack, Suga gave Kageyama advice on what to do, telling him that he should try adjusting to Hinata's spikes. A lot of people don’t realize it, but if Suga never told him to adjust to Hinata, they would have never been able to pull it off their quick attack, meaning that they would have lost almost every game that they played.

Sugawara recognizes Kageyama's amazing abilities, as he watched his match against Hinata in Junior High. Suga also called him a "talented first-year setter". But even though he knows Kageyama is very good, he is still unwilling to "give" the position of the official setter to him. He does, however, let Coach Ukai understand that his dreams won't be crushed even if he isn't playing as a regular. So he continues to treat Kageyama as a junior that he could both teach (especially in regards to interacting and communicating with the team) and learn from. Sugawara is also shown to be Kageyama's "handler", mostly in the early chapters where he's given the task to calm Kageyama down.

Suga is also the one who fills in for Kageyama whenever he gets hurt or doesn’t feel well. Though Kageyama does excel in a lot more things than Suga does, Suga is very good at communicating with his team, which gives the team sense of trust whenever he's around. When Suga and Kageyama do their synchronized attack with Suga as the setter and Kageyama as a spiker, it gives Karasuno five available spikers.

“Kageyama, make sure that when you get interviewed, you tell them that your wonderful senpai named Sugawara showed you the ropes.”
— Sugawara to Kageyama in "Introductions"

It's a very common AU in fanworks for Suga to be in college or for Kageyama to be a second-year. People seem to like this ship a lot because of the fact that Suga acts like a mother for Kageyama (and everyone else on the team). Some people like to think of Suga and Kageyama's trainer.

SugaKage is a fairly popular ship in the fandom, but the majority preferring shipping DaiSuga and KageHina. However, there is a small fanbase across platforms.

Suga is known to have a gentle, courageous personality. Suga is someone who tries his hardest even at the worst times. Kageyama on the other hand is a perfectionist and intelligent person when it comes to volleyball, but pretty much clueless when it comes to school or anything else. Though they play the same position, they have opposite personalities. For people you like opposites attract tropes, this is a really good ship. The fact that they play the same position is another reason why people ship them, as some people ship people with characters that are similar to them.

Though the ship is so popular, it actually doesn’t get too many moments. 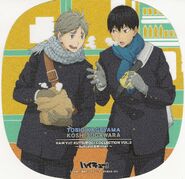 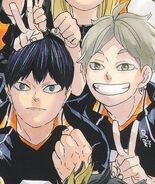