Sugar Rush is the femslash ship between Ruby Rose and Nora Valkyrie from the RWBY fandom.

Nora and Ruby first met at Beacon and quickly became friends. As Team RWBY and Team JNPR settled into their new school life they all often sat together at lunchtime. At one point Nora and Yang started a food fight, which the other members of their teams including Ruby joined in at some point. In volume 2 Nora's team came to help Ruby's team when a horde of grimm had infiltrated Vale. During the vytal festival Ruby and Nora cheer each others teams on when they participate in the tournament.

After the fall of Beacon, Ruby takes off with Nora and the rest of team jnpr to head off to Mistral. In the beginning of volume 4 Ruby uses her petal burst semblance on Nora and they eventually team up to take down the geist grimm. Later in the volume when they meet Tyrian, Nora protectivly steps in front of Ruby and asks him "What if she doesn't want to go with you?". They then team up together with jaune and ren to take down the nuckelavee. Ruby at one point during the fight shoots Nora with electricity dust knowing it would help enhance her semblance.

In volume 5, when the group is first introduced to Oscar and he says he's looking for Ruby, Nora glares at him and acussingly asks him why. Later during the battle of haven academy, Nora rushs to Ruby's side after she is knocked unconscious by Emerald. She then also helps Ruby up and Ruby uses her shoulder a crutch when she eventually wakes up. In volume 7 Ruby joins Nora and Ren as they go to Robyn's election party. In "Worst Case Scenario", Ruby tries to calm Nora and Ironwood down as they had gotten into an argument. She puts a reassuring hand on Nora's shoulder and tries to act as the voice of reason. In volume 8 chapter 1, Nora chooses to go with Ruby instead of Ren and the rest of her team.

Sugar Rush is a rarepair in the RWBY fandom. Since the two haven't had much interaction in the show. Fans of the ship are often drawn to their similar natures, both are silly, good natured and try to always remain positive. Some fans have even jokingly refered to the two as the "cookie queens" since they both share a love of cookies and sugar. Sugar Rush has a small following on tumblr. 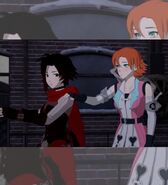 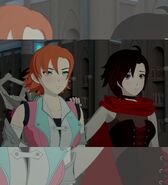