“I shall be waiting for you. ”
— Uraume to Sukuna.

SukUme is the non-binary ship between Ryoumen Sukuna and Uraume from the Jujutsu Kaisen fandom.

Though not much is known about their relationship, Sukuna and Uraume are significantly close. The two have stayed with each other for a thousand years all the way back in the Heian Era where Sukuna was once a human. It is assumed that Uraume knows Sukuna better than anyone since they have spent a long time together.

While there is not much known about Uraume as well, they seem to be very loyal and devoted to Sukuna. As for Sukuna, it is unknown of what kind of relationship he has with Uraume, but he seems to respect them nonetheless. Sukuna is also shown to be more patient and friendly towards Uraume unlike all the other people he's met so far.

The two reunited when Jogo was defeated. Uraume had come to find Sukuna and escort him, Sukuna seemed very surprised upon seeing Uraume as he didn't recognize them initially. Once Sukuna realized their identity, Uraume smiled and told Sukuna that it was nice seeing him again. And when the time came that the two had to part ways, Sukuna tells Uraume it wouldn't be much longer until he's completely free, and before he leaves, Sukuna tells Uraume that he'll see them later. Uraume waits until he leaves and says that they will be waiting for him.

The creator of Jujutsu Kaisen, Gege Akutami said that Sukuna in his human years never had wife or children, he only had Uraume. Gege also added that Uraume is Sukuna's close aide whom he trusts.[2][1]

Due to Jujutsu Kaisen Season 2 not being animated yet, SukUme is more popular within those who've read the Manga. The reason why fans love the ship so much is because of Uraume and Sukuna's closeness. From Uraume being eternally loyal and devoted to Sukuna, to Sukuna willingly letting Uraume stay by his side for a thousand years. Fans also like to believe that Sukuna has "soft spot" for Uraume, since most fans feel that it is impossible for Sukuna to keep someone by his side for so long. The fans find their relationship endearing despite knowing so little.

Many who make alternate universes for Sukuna and Uraume in fan fiction or artworks often involve the two living together. The song that a lot of fans think suit them is "A Thousand Years" by Christina Perri.

A theory in the SukUme fandom is that there is some kind of connection between Sugawara no Michizane and Sukuna and Uraume. Sukuna has a similar ox connection with Suguwara, as well as his Domain Expansion looks a lot like Sugawara's Daizafu shrine. While Gege Akutami based Sukuna off of the historical figure Ryomen Sukuna, fans think that some inspiration was also taken from Sugawara Michizane as well. Sugawara also deeply loved plum blossoms, plum trees, and plums, to the point that he wrote many poems about them. The kanji in Uraume's name, "Ume" «梅» means "plum" "plum tree" or "plum blossom". SukUme fans think this could be a hint of romantic feelings from Sukuna since him and Sugawara have many similarities.[3][4]

SukUme in fanfiction explores reincarnation or Modern AU's where Uraume and Sukuna get to meet each other when Yuji is his vessel. These AU's often involve Uraume being a teacher at Jujutsu High with Satoru Gojo as their best friend. SukUme is also shipped by few who ship Eremika from the Attack On Titan fandom due to both of the couples having cinematic parallels. Sukuna and Eren both being mass murders, criminals, and having someone by their side for a long time. The two pairings also bid goodbye to each other with a "see you later." SukUme is also jokingly compared to Zutara from the Avatar: The Last Airbender fandom. This is due to Uraume and Sukuna having the iconic "Fire and Ice" abilities like Zuko and Katara.

“It's nice to see you again.”
— Uraume upon seeing Sukuna again after a thousand years.

“It's good to see you again after such a long time.”
— Official Spanish translation of what Uraume says to Sukuna in chapter 116.

"Sukuna's close aide. A chef as well as a sorcerer."

Gege Akutami's sketch of Uraume and Sukuna in the most popular characters sketches. 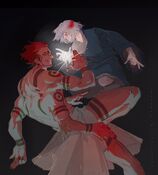