Sunflowyr is the het ship between Lie Ren and Yang Xiao Long from the RWBY fandom.

Yang and Ren first met each other during the initiation process in the emerald forest. Her, Ren and everyone else from teams rwby and jnpr all eventually found each other and teamed up to escape the emerald forest together. In the first episode of volume 2 teams rwby and jnpr get into a food fight at lunch. Yang shoves her hands into turkey's and proceeds to fight Ren with them, while he uses two long celery sticks as his weapons against her.

In volume 3 during the vytal festival tournament, Yang and the rest of team rwby are in the audience cheering on Ren and the rest of team jnpr during their fight against team brnz. After the fall of Beacon, Ren takes off with Ruby and the remaining members of team jnpr to head off to Mistral. Yang stays behind at her home for she was still recovering from her injuries and ptsd. Yang and Ren were then reunited in volume 5 chapter 6 along with Weiss. In chapter 7 they then have dinner together, and everyone reminices on what they've been through up til that point. Ren then gives a thoughtful speech on how he thinks they've all changed so much and to be encouraged by that fact.

In volume 6, chapter 7 when the two groups are reunited Yang and Ren run over to each other and hug. In volume 8 chapter 1, after the events in Atlas and Mantle in volume 7, Ren and Yang decide to team up with Oscar and Jaune to help get the rest of the people of mantle to safety. During this time Oscar gets kidnapped by a sentient grimm called the hound and her, Ren and Jaune try to go after it to save Oscar. While they are chasing the hound, Jaune projects Ren off his shield and is launched towards the grimm where he uses his grappling gun to latch onto the grimm. While Jaune and Yang are chasing after the three of them Yang's bike gets damaged and they're almost thrown off a cliff. Ren then comes in at the last second to save them, and masks their emotions when another flying grimm comes at them.

The three of them are then seen walking through a soon to be blizzard with Jaune hauling Yang's damaged hoverbike in tow. They then start to look for an outpost before their auras deplete completly. On the way there, however Ren’s attitude sparks a confrontation with Yang, and the two argue about whether or not they should be Huntsmen. With Ren arguing they are in way over their heads and Yang arguing that's part of the job and they can't just sit around and do nothing. When Jaune then attempts to stop them, Ren snaps at him about how he cheated his way into Beacon Academy. Jaune refuses to take the bait, insisting they still have a job to do, while Yang berates Ren for pushing everyone who cares about him away. They are then seen at an outpost and Jaune tries and fails to get Ren to open up about his feelings. Ren then leaves in a huff and sits outside. Yang then tells Jaune to get some rest while she watches Ren and makes sure he doesn't brood himself to death.

Sunflowyr is a rarepair in the rwby fandom since these two have barely spoken to each other until recently. People who don't ship this pairing usually ship other pairings like, ReNora, Freezerburn, Bumbleby, Baked Alaska, Combat Boots, Pink Lemonade, Dragonslayer and Martial Arcs. 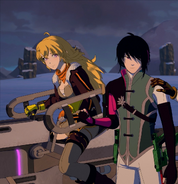 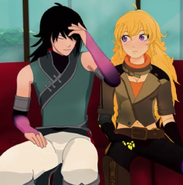