• A Friend in Need - Basil was the one who cared most about Sunny when he was grieving over the death of his sister, Mari.
• A Shared Suffering
• Because You Were Nice to Me
• Best Friends to Lovers - Sunny and Basil have been childhood friends for 4 years, they are also best friends.
• Birds of a Feather
• Childhood Friends
• Childhood Friend Romance
• Hair Contrast Duo - In many games or series, there are certain ships or couples that have blonde and black hair color, just like them.
• Opposites Attract
• Please Don't Leave Me

“Sunny…don’t worry. Everything will be okay.”
— Basil to Sunny

Sunflower is the slash ship between Sunny and Basil from the Omori fandom.

Sunny and Basil had been friends since they were children. Sunny is Basil's best friend, and he takes more pictures of him than any of the other members of the party. They were more in tune with each other than the rest of their peer party. "I always end up venting to him when I get upset or stressed," one of the captions in Basil's photo album reads.

After Mari's passing, Sunny cut himself off from the outside world and started talking to Basil. Despite this, Basil shows some affection for Sunny, pleading with him not to leave on many occasions. He defends Sunny to the point of blaming his conduct against Mari on "something behind him" he refuses to believe Sunny might have done such a thing.

Basil's protectiveness also leads to him being bullied when he is blamed by Aubrey for striking out faces in the photos inside the photo book, which is later discovered to be the work of Sunny. Despite his protectiveness, when they eventually meet face to face, his feelings for Sunny are complicated. He is angry that Sunny secretly vanished after Mari's death, despite the fact that he sheltered Sunny for years and kept the circumstances of Mari's death hidden. If the player saves him, Basil thanks Sunny for "finally coming back for me," but feels cheated that Sunny did so just days before he was supposed to leave.

If Basil's flowers were consistently watered in the Dream World segments of Omori on a Sunny Route's Good Ending, there will be an extra cutscene after the credits, depicting Basil waking up to Sunny, who smiles warmly at him. He smiles back, and both of their Somethings disappear.

Many ship Sunnflower because of how close the two are together, with Basil protecting Sunny and refusing to believe he'd be able to kill Mari. It is the most written about ship on AO3 for both Sunny and Basil, with a little over 1000 stories. It's main rivals are Sunburn and Suntan. But it is a popular ship with Basil in the Omori Fandom.

The ship name "sunnflower" is because of the 4 letters of Sunny's name, and Basil is a plants name, and "sunflowers" represent Basil, since sunflowers remind Basil of himself, it could also be how Basil wears a flower crown/flower in his hair, so that represents "flower" in "sunn'flower'", or how Basil loves flowers.

Fans of the pair also like to believe that Basil could have possibly had feelings for Sunny, as it is not true or confirmed it is still a popular headcanon/theory that people like to believe in. This ship also sailed for its dynamic, or how similar they are, or how close they are. Because of this, the ship sailed with some fans of the pair or even non-fans believing it. 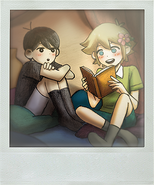 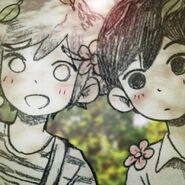 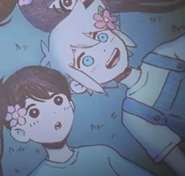 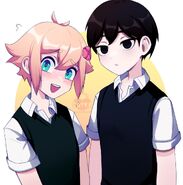 Sunflower Session - refers to the ship between Sunny, Basil, and therapy