SuperFlash is the het ship between Kara and Barry from the Arrowverse fandom.

Kara and Barry meet in the Spring, when Barry's training to improve his speed and runs fast enough to cross the dimensional barrier to Earth-38, where he saves Kara's life. She informs him this was unnecessary and flies away, revealing that she's Supergirl. Barry follows and they collide, realizing that they're both superheroes. Barry enlists Kara's help to return to his earth, while Kara is thrilled to have a 'superhero colleague' who can share her experience in a way few people can. While working to return Barry, Kara deals with Silver Banshee and Livewire teaming up. Barry helps Kara fight and defeat them, saving Cat Grant in the process.[2]

In the Autumn, when the Dominators threaten Earth, Cisco breaches himself and Barry to Supergirl's Earth-38 and into her living room. Kara's surprised to find Barry there but glad to see him and he tells her they need her help against an alien attack. Kara's response is to immediately spring into action like the hero she is and travel to another earth in the multiverse for the first time, with Barry.[3] Kara accompanies Barry to meet the Legends and Team Arrow for the first time. When Barry tells the team-up about Flashpoint, Kara is one of the only people to stand by Barry, saying that she'll always trust him. Because of the teams' reaction to Barry's revelation, Kara leads them on a mission without Barry and Oliver, tracking the Dominators to an abandoned warehouse. Once there, they are overtaken by mind control and set on the path to fight and destroy Barry and Oliver. Barry, being the only other super-powered hero not affected, fights a lethal Supergirl and uses his speed knowledge to outmanoeuvre Kara, who is tricked into destroying the mind control device, releasing her and the others.[1]

Kara and Barry team up with Ragman, Mr. Terrific and Wild Dog to retrieve a regulator that'll help them hack the Dominator tech Cisco provided. It's been stolen by a villain and they track her to a facility. As they arrive, Ragman expresses how great it is to meet The Flash and Barry responds in favor of Supergirl being the more impressive introduction. Barry also stands up for Kara when Wild Dog is less than impressed with what he perceives as their negative responsibility for bringing aliens and meta-criminals on the scene. Barry and Kara tag-team to take out Cyber-woman. Wild Dog thanks them and indirectly apologizes, saying he's glad there are heroes out there like Barry and Kara.[4]

Team Arrow and Ray return to Central City from their Dominator-abduction and Waverider escape, and discuss with Kara and Barry, along with Stein and Cisco, how to proceed. Oliver keeps Kara from joining their meet-up with the President and Barry queries why, commenting that he didn't even know Kara could be that angry. When the CIA-operative tells them that the Dominators are attacking because Flashpoint negated their previously established truce and that they want Barry, he is willing to give himself up to save the world. Kara, Oliver and the others refuse to let Barry sacrifice himself or take the blame for the current crisis. The teams engage the Dominators in combat, while Barry plants nano-weapons on them with his superspeed. To cover the entire world, Barry and Kara team up, using their superspeed to plant the weapons on all the Dominators on Earth. The tech works and the Dominators retreat. Standing side by side, Barry, Kara and the teams get awarded a medal from the President at a ceremony commending their bravery in saving the world. The teams celebrate at the S.T.A.R. Labs hangar and Kara talks to Barry and Oliver about being leaders and saving the world, calling them 'Earth's Mightiest Heroes' and they share a group hug.[5]

In Spring 2017, HR calls Barry and Cisco to S.T.A.R. Labs as someone unidentified is coming through a crossdimensional portal. They arrive and Barry sees Kara being carried, passed out, and Barry says her name breathlessly, asking what happened to her. J'onn tells them that they don't know, but that the assailant is now on Earth-1. After tending to Kara, the villain shows up in the speed lab and Barry fights him, but loses. The Music Meister tells Barry he is tyring to teach both Barry and Kara "a lesson". Barry wakes up in an old-fashioned art deco cabaret and is surprised to see Kara on stage. Barry watches, mesmerised, as she sings. Afterwards, Barry runs and meets Kara backstage, who is relieved to see Barry and hugs him. They try to find out where they are and walk into the cabaret, surprised to apparently be working for Merlyn, who isn't Merlyn, and meet Winn and Cisco, who aren't Winn and Cisco. They feel like they're stuck in a musical and Music Meister appears. He tells them that they're in a "dream" of their own creation, based on their mutual love of musicals. With the help of J'onn and Cisco, Team Flash manage to save their lives and break them out of their coma, defeating the Music Meister.[6]

In Autumn 2017, Kara travels with her sister Alex to attend Barry's wedding, in spite of her recent heartbreak and at the wedding reception at CC Jitters, Kara hangs out by herself upstairs away from the crowd. Barry goes to talk to her and asks where her boyfriend is, and Kara shares with Barry her break-up and how hard it is. Barry tries to console Kara by relaying his own experience with romance and superpowers, but concedes that what happened to Kara is beyond even his time travel shocks. Perhaps in an effort to cheer her up, and because of their friendship, Barry asks if Kara will sing a song at the ceremony and she gladly agrees. The next day, as Kara sings, the ceremony is interrupted by Nazis from Earth-X and Kara must fight off her evil Nazi doppelgänger in a spectacle inside the church, as Barry, Green Arrow, Frost, Vibe, Firestorm, White Canary, Heatwave, Kid Flash, Alex and Harry fight alongside her. After the Nazis retreat, Kara helps escort Earth-X Prometheus to S.T.A.R. Labs and then goes to the cortex to discuss what's going on with Barry and the others.[7]

Kara and Barry witness the reveal of Earth-X Prometheus as Earth-X Tommy Merlyn in the pipeline and Oliver's emotional reaction as seeing Tommy. Oliver asks to be alone with the prisoner, so Kara and Barry return to the cortex to discuss why a time-traveling Tommy would seek them out. Caitlin and Barry surmise that it's a Tommy from another Earth and Harry poses that he's from the 53rd Earth that's defied definition — an earth where the Nazis won WW2, which horrifies everyone. Barry suggests they start work on locating the Nazis' whereabouts in Central City. The Nazis break into Dayton Optical Systems and Kara and Barry, along with Oliver, move out to engage them. As Barry and Kara get to the site they stand around for a bit and wait for Oliver to arrive on his bike and he does, reiterating that he doesn't have super speed like them. They're met by the Nazi trio who reveal themselves to be Kara and Oliver's doppelgängers and Eowells. Barry is shocked to see Thawne alive, as Kara is to meet an evil version of herself. They fight and Earth-X Kara attacks a nearby work site, which Kara, Barry and Oliver hasten to save from collapsing and killing innocent people. They track them with Earth-X Kara's blood from Oliver's kryptonite arrow and suit up to confront the Nazis. They fight a horde of Nazi soldiers but are defeated by Kara-X, Thawne and Metallo. As they wake up, they have all been tied up and collared with power dampeners. Oliver-X returns and they reveal their plan: to kill Kara and take her heart as Kara-X is dying. They're all horrified but drugged once more and awake in a concentration camp on Earth-X, without Kara.[8]

The heroes are saved by the Freedom Fighters, and brought to their headquarters where, with the help of the Fighters, they find a way to get back to Earth-1 to save Kara.[9] Upon their return, they find the Kara has already been rescued by Atom and the Legends. Kara recuperates and the heroes suit up to avenge their fallen friend. Kara fights her doppelgänger, while Barry faces off with Eowells. They're successful and solemnly attend the funeral of Martin Stein. Afterwards, Kara and Alex get ready to return to Earth-38. Kara and Barry say goodbye and Barry watches with the others as Kara and Alex open and portal and return to their earth.[10]

Superflash is a fairly common pairing, although both characters have bigger het/femslash/slash ships on their respective shows. The pairing is popular due to Kara and Barry's commonalities, such as their sunny demeanors, and the fact that the chemistry was evident from the moment they met. The popularity also stems from both being the title characters helming their own shows, with Kara being the first female superhero to have her own show in the Arrowverse. On AO3 it is the fifteenth most written ship for Barry and the ninth most written for Kara. It is also the fifteenth most written in the Supergirl (TV 2015) tag, and the twenty ninth most written in The Flash (TV 2014) tag. 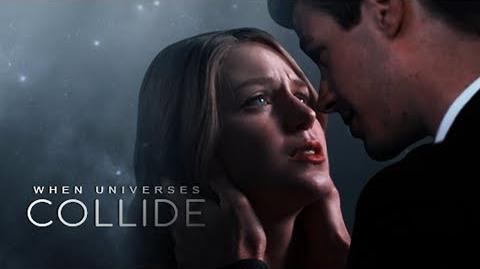 ❖ Barry and Kara When Universes Collide 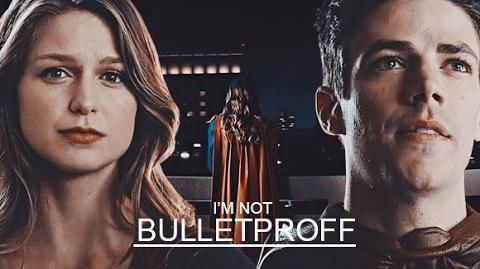 Barry and Kara I'm not bulletproff. 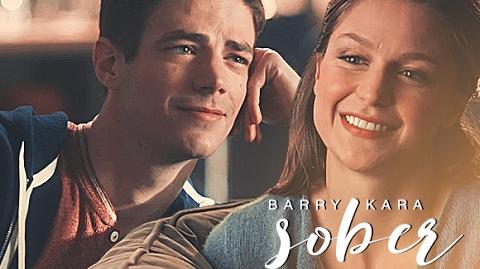 Retrieved from "https://shipping.fandom.com/wiki/SuperFlash?oldid=168638"
Community content is available under CC-BY-SA unless otherwise noted.