Superarrow is the het ship between Oliver and Kara from the Arrowverse fandom.

Oliver – “Barry I thought you were bringing an alien”
Barry – “An- ah, yeah, uh we did. Everyone, this is my friend, Kara Danvers, or as she's known on her earth - Supergirl”

Oliver and Kara meet in a S.T.A.R. Labs hangar in Central City, when Barry recruits Kara to help fight the dominators in the Autumn. Kara demonstrates her powers and relays information regarding the Dominators, that she remembers from when they attacked Krypton. As the most powerful hero, Oliver suggests that Kara should be a stand-in as they train to fight the Dominators. Oliver poses that they should start by doing a test-run against Supergirl. Barry takes them aside in excitement over them meeting and Oliver's stern demeanour immediately starkly contrasts Kara's friendly, sunny disposition. Barry mentions Oliver trained him, and Kara compliments Oliver on his efforts, to which Oliver responds that he shot Barry. Oliver sternly mentions to Kara that she cannot hold back when they fight her and Kara says it might be odd going full throttle against people she just met.

Oliver – “These people need to understand that this isn't gonna be easy. Don't hold back — especially against me”
Kara – “Yes, Sir”

Having gone a few rounds with Kara, Oliver insists that they keep at it, although he asks for a break as everyone's exhausted. After Barry tells everyone the truth about Flashpoint, they're stunned and angry. Word comes in that the President has been abducted and Barry decides to stay back to not disrupt focus. Oliver doesn't accept it and refuses to go without Barry, so Kara steps in as a third partner to the guys and tells Oliver to stay with Barry while she goes with the group to find the President. While checking out the Salt Mines, the heroes get mind-controlled and return to S.T.A.R. Labs to take out Barry and Oliver, who suddenly have to fight their friends and family. Barry tricks Kara into destroying the device controlling them and they return to normal, but while Kara's scanning for more devices, Oliver gets abducted by the Dominators.[1]

Once Team Arrow returns from having been abducted, the President asks to meet with the heroes. Kara offers to come along as back-up, but Oliver asks to speak with her privately. Once alone, Oliver informs her that he is overwhelmed by the thought of aliens, after having to adjust to meta-humans and lashes out by closing off Kara's involvement in the mission where he's concerned. He tells her he knows it's not nice, but it's the way he is. Though Barry tries to quell Kara's hurt and frustration over Oliver's behaviour, it creates friction. During the battle against the Dominators, Kara saves Oliver's life as they fight side by side and they share a moment mid-battle where Oliver acknowledges the gift. After defeating the Dominators and being awarded for their courage in a ceremony, the teams celebrate back at the S.T.A.R. Labs hangar. Kara goes to talk with Oliver and Barry, upon which Oliver profusely apologises for his behaviour before. He tells Kara that they could use a Supergirl, to which she replies that she thinks that her earth could use a Green Arrow. A mutual respect and affection is established between them, as Kara joins Oliver and Barry's partnership.[2]

Kara and Oliver see each other again when they are invited to Barry's wedding in Central City. When the ceremony is interrupted by attackers vaporizing the minister, everyone looks up to see the attackers wearing Nazi symbols, upon which Kara and Oliver simultaneously exclaim "I hate Nazis". All the heroes scurry and jump into battle against the Earth-X Nazis and succeed in driving them away. Kara subdues them all with a deafening super-clap and the villains' retreat. Afterward, Oliver and Kara bring Earth-X Prometheus back to S.T.A.R. Labs and join everyone in the cortex to discuss what is happening.[3] Oliver and Kara are surprised to learn that their Earth-X Nazi counterparts were married, grossing out Kara entirely. Oliver seems slightly affronted at the notion. As they face-off with their evil counterparts and Eowells, Oliver shoots Earth-X Kara with a Kryptonite arrow. Kara's aghast that, not only does Oliver have a Kryptonite arrow, but he didn't tell her. Earth-X Kara pulls out the arrow and moves to attack Oliver, but Kara shields Oliver and blasts her doppelgänger away with freeze-breath. Earth-X Kara attacks a work site tower and Barry runs the workers to safety, while Kara and Oliver work together to re-stabilise the tower, as the Nazis get away.

The scientists locate Earth-X Kara via Oliver's Kryptonite arrow and Supergirl and Green Arrow, along with White Canary, The Flash, Firestorm and Alex, go off to fight them. Only, it's a trap and they're taken out by Metallo, Earth-X Kara and Eowells, while Earth-X Oliver attacks S.T.A.R. Labs. The heroes wake up chained and with power dampening collars on, Kara and Oliver next to each other. The Nazi doppelgängers reveal that their Kara is sick from too much solar radiation and they're going to use Supergirl for a heart transplant to cure Earth-X Kara. Upon learning this, Green Arrow looks Earth-X Oliver straight in the eye and says he is going to kill him. Metallo blasts them again and they wake up on Earth-X, without Kara, in a concentration camp.[4] The heroes trapped on Earth-X are saved by the Freedom Fighters, while Eowells is only momentarily delayed in attempting to kill Kara.[5] With the help of the Freedom Fighters, the heroes manage to get back to Earth-1 and Kara is saved by The Atom in the nick of time. The reunited Legends of Superflarrow team fight the Nazis and are victorious, Oliver killing Dark Arrow as he had vowed. Afterwards, everyone attends the funeral of Martin Stein. As Kara and Alex prepare to return to Earth-38, Kara and Oliver share a fist bump goodbye, having gotten through their weird doppelgänger encounter unscathed.[6]

When Barry and Oliver wake up in each other's lives, with swapped identities, they decide to travel to Kara's earth to ask for her help in figuring out what happened to them.[7] They arrive on the Kent family farm and Kara immediately recognise them as their true selves, to Oliver and Barry's relief.[8]

Neither rare-pair nor common, but a mainstay of the fandom, especially after Supergirl moved to the CW and became part of the crossovers. Stephen Amell's comments in interviews leading up to the first crossover of the entire Arrowverse added fuel to the proceedings. Although considered unlikely, given that they live on different earths and only cross paths in the annual crossovers, a renewed interest sparked at the surprise reveals that their Nazi Earth-X counterparts were paired. On AO3 it is the twelfth most written ship for Kara, and the fourteenth for Oliver. It is the twenty-third most written ship in the Arrow tag and the eighteenth most written in the Supergirl tag. It also became popular on the Arrow Subreddit during the offseason 2017 as a way to satirize the Olicity Fandom.[9][10] 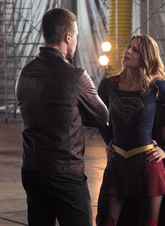 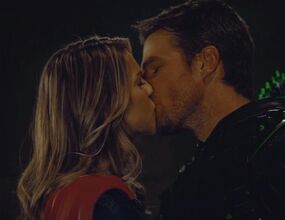 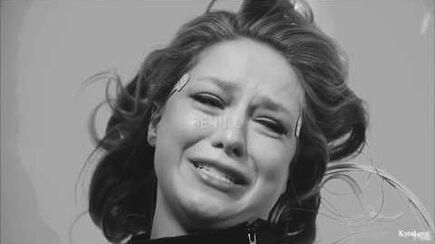 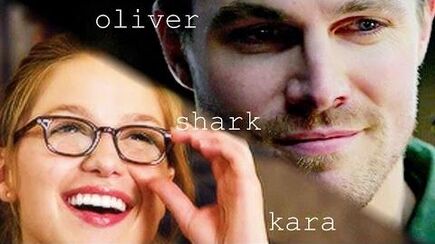 Oliver & Kara It's killing me to love

SuperArrow- let me love you

Kara and Oliver Just A Kiss

Kara and Oliver - Rewrite the stars

Oliver & Kara Here with me

Oliver & Kara ll I can't help but love you

Kara & Oliver I love you, please say you love me too Their Story AU

〉I disregarded all character direction when it came to Oliver interacting with Kara. At all times - he's supposed to be mad at her and I would just stare at her longingly〈
—Stephen Amell[11]