Surviving Trio is the poly ship between Shuichi Saihara, Maki Harukawa, and Himiko Yumeno from the Danganronpa fandom.

The group doesn't interact as a trio initially. In fact, they only do once Tsumugi Shirogane is revealed as the mastermind of their killing game and K1-B0's personality is erased in the final Class Trial.

In Chapter 1, Shuichi hangs out with Kaede Akamatsu, whereas both Himiko and Maki keep their distance from the group. However, both girls are chosen to be in Kaito Momota's group trying to stop the killing game.

In Chapter 2, Shuichi hangs out with Kaito, Maki protects her Research Lab as it reveals her actual talent, and Himiko is busy making her magic show with Angie Yonaga.

In Chapter 3, the trio slowly begins to form, as Maki joins Shuichi and Kaito in their trainings, befriending both of them.

In Chapter 4, Maki continues being Shuichi and Kaito's friend and trains with them more. Both Himiko and Maki, along with everyone else, make comments about Shuichi being a masochist for enjoying being given orders by Kaito, and about him being reliable for the Class Trials.

In Chapter 5, Maki's friendship with Shuichi continues as she tries to make him and Kaito make up after the last Class Trial. All three visit Kaito by themselves. The trio would later train together after the Class Trial, along with Tsumugi Shirogane.

The trio is finally formed in Chapter 6. Although initially the entire group of five survivors works together to stop the killing game once and for all, the number is reduced to the trio with the reveal of Tsumugi being the mastermind and the removal of K1-B0's personality. This is especially the case after the final execution, which only the trio survives, as shown in the Epilogue. The three theorize about the authencity of Tsumugi's claims as they're about to re-enter the real world.

The ship sailed with the popularity of OT3s in the fandom. The three being the only survivors of the New Killing Semester naturally made them one of such OT3s. This is also a popular choice among fans who ship only the characters who are alive and don't go for "alternate story" type of scenarios. Their similarities, such as black-and-red colored clothing or the fact that each of them lost someone important to them during the killing game also made this ship more popular.

Another part of the reason behind this ship is a certain plot point which shows the cast as the last survivors of humanity. With Kokichi Oma and Kaito Momota dying in the same chapter it was revealed, K1-B0 being a robot, and Tsumugi turning out to be the mastermind, fans often saw Shuichi as the "Adam" to Himiko and Maki's "Eve." Some still do, even after the aforementioned plot point being later proven to be a fabricated memory.

Nonetheless, it is still a minor ship, especially as it's known only by those fans who have finished the game. Furthermore, each member of the trio has their own far more popular ships, ones that actually get some ship tease in canon, such as Tenmiko for Himiko, Harukaito for Maki, and Saimatsu for Shuichi.

Being the only survivors of Danganronpa V3: Killing Harmony, they're dubbed as the "Surviving Trio" by many fans. However, as the title itself contains major spoilers, they're referred to as such on websites for fans who have already finished the game, and are usually called differently elsewhere. 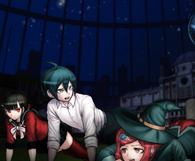 Saihara, Harukawa, and Yumeno in the Chapter 6 Mass Panic Debate