View source
watch 01:55
Cobra Kai Season 4 - The Loop
Do you like this video?
Play Sound
WOAH! THAT'S ONE SMALL SHIP!
• THIS ARTICLE IS A STUB. YOU CAN HELP BY EXPANDING IT •
Stub pages are deleted after 4 months and if not filled out enough, Swan Queen will be deleted
4/18/22

• Hair Contrast Duo
• Fire-Forged Friends
• Odd Friendship
MOMENTS
• Almost Kiss - In the first season, Regina and Emma almost kiss.
• Belligerent Sexual Tension - Emma has already put Regina against the wall, which has created a certain sexual tension between the two.
• Closed Door Rapport - After Emma brought "Marian" back, Regina was upset with Emma for bringing her back and thinking that her love with Robin was not going to work; so Emma went to her house to apologize.
• Heterosexual Life Partners - Regina chose Emma over Robin when Rumpelstiltskin threatened her.
• "I Know You're in There Somewhere" Fight - Regina did not give up on Emma when she became the Dark Lady.
• Accidental Hug - Regina hugs Emma when she finds out that she and Captain Hook are getting married.

Swan Queen is the femslash ship between Emma Swan and Regina Mills from the Once Upon A Time fandom.

Regina Mills, formerly known as the Evil Queen, is the adoptive mother to Henry Mills, the biological son of Emma Swan, daughter of Snow White and Prince Charming. Regina and Emma meet through Henry who went looking for his "real mom". Antagonism runs a muck between these two, particularly on Regina's side as she hated that Henry went out and found his birth mother. When Regina learns that Emma is the "Savior", meant to break Regina's curse, she hates Emma even more so.

Emma and Regina continue to fight once the curse is lifted. However, because Henry asked her to, Emma repeatedly saves Regina from the vengeful mob of newly-woken fairytale characters out for her head. In her efforts to save Regina from getting her soul eaten by a Wraith, Emma accidentally triggered Regina's own magic by laying a hand on her arm, and then subsequently fell through a portal to the Enchanted Forest (aka Fairy Tale Land or FTL). Emma's absence gave Regina an opportunity to have Henry to herself forever, but because she made a promise to their son that she would be "better" and earn his love, she absorbed a death curse to save Emma and let her return to Storybrooke.

There were quite a few subsequent issues involving the return of Regina's abusive mother, Cora, a trip to Neverland, evil Peter Pan, the Wicked Witch of the West aka Regina's older sister Zelena, and although they still don't always get along, Emma and Regina now more often than not join forces to protect their family and the town.

“We never created "SwanQueen" or "Snowing" or "RumBelle" or "CaptainSwan" or any of the ships, subtextual or not—our fans took our stories and ran with them. We fully expect them to continue to do so.”
— Adam & Eddy to AfterEllen[1]

Henry is Emma's biological son of son and Regina's adopted son. Emma gave Henry up for adoption after he was born and ends up being raised by Regina, who wants Henry to love her. When Henry found Emma and brought her to Storybrooke to brake the curse that was cast by the Evil Queen, Regina was worried that she'll end up taking Henry away from her. In the end, Emma and Regina become friends and came up with away for them to share Henry as co-moms.

The ship came to be when viewers started to notice the evident subtext between these two characters and when they started paralleling many canon true love couples on the show. This ship rivals the CaptainSwan and OutlawQueen pairings, which are both canon.

The pairing quickly gained traction in fandom, drawing femslashers from far and wide. However, as the series went on, fans of the pairing developed a somewhat tense relationship with the show's production team as SwanQueen has several times been cited as an example of queerbaiting, one of very few noted femslash examples of the same. Cranz notes in their History of Femslash:

“Once Upon a Time’s premise is a little gay. A kid has two moms, and those moms like to argue passionately with one another while looking at each other’s lips. It spawned the major pairing, SwanQueen [...] But the showrunners of Once Upon a Time were not even a little okay with the queer focus of fandom, or the demands hinged on “social justice,” and they went out of their ways to assert the hetero nature of the leads. First by calling any flirtation “unintentional,” and then by trucking out male love interests for both characters, who just happened to be identical to the supposed female love interests apart from how they identify gender-wise”
— History of Femslash[2] 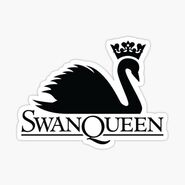 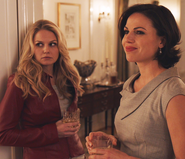 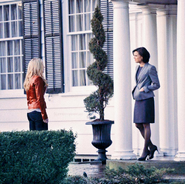 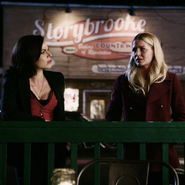 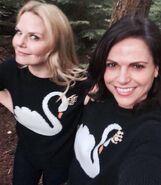