• Battle Couple - Considering that they only way for either to fight is to be attached to each other.
• The Big Damn Kiss
• Dating Catwoman - Venom's not exactly fully on the side of good.
• Declaration of Protection
• Did You Just Romance Cthulhu?
• Enemies to Loves
• Fire-Forged Friends
• Fourth Date Marriage
• Headbutting Heroes
• Interspecies Romance
• Lonely Together
• Love Redeems
• Love Triangle
• Meet Cute
• Not So Different
• Odd Friendship
• One Head Taller
• Please Don't Leave Me
• A Shared Suffering
• Star-Crossed Lovers - Literally. Venom's from space.
• Temporary Break Up
• You Are Not Alone

Symbrock is the non-binary ship between the Venom Symbiote and Eddie Brock from the Venom fandom.

Eddie is approached by a scintist working for Carl Drake who tells him that Drake is killing people with his experiments. After some time to think over her proposition, Eddie agrees to help her and she breaks him into the lab. While taking picture's of the lab, Eddie see's a woman that he knows and breaks her out. She attacks him, and a black goo, the Symbiote, seeps into him, but he doesn't notice. The alarms go off and Eddie runs away. Security finds him and he seems to be have gained some kind of power that allows him to defeat the guards in a fight, and eventually get away.

Eddie is able to get back to his apartment, and starts to eat everything he can find before throwing it all back up. He brushes his teeth to get the taste out of his mouth, but when he looks in the mirror, a brief appearance of the symbiote appears in the reflection and he freaks out, accidentally knocking himself out in the process. When he awakens, he reaches out to ex-fiance Ann for help, who takes him to a doctor for an MRI. On his way home, he starts to lose control over his body and starts to hear voices in his head. Once at his apartment he gets a call saying that he has a parasite, followed by a voice becoming offended at the word. He ends the call trying to figure out the voice in his head.

There's a knock at Eddie's door, and the voice tells him not to open it, but he does anyway. Several men come in and aim tasers and guns at him. Eddie tries to surrender but the symbiote won't allow it, and fights off the men. Then men chase Eddie down, and with the help of the Symbiote almost gets away before one of them hits him with a car. Eddie lies on the ground extremely injured, but the symbiote starts to mend him back together and takes over, attacking the men and biting one of their heads off. The police arrive and start shooting at the symbiote as it dives into the bay and swims away.

The sybiote gets to the other side and lets Eddie take control. Eddie becomes increasingly confused and freaked out, and part of symbiote appears outside of him, officially introducing themselves as Venom. They want to form an alliance with Eddie. Eddie will act as their host to get to Drake's space ship so that they may return home. Eddie agree's but he wants to make a stop at his old work place to get the evidence of Drake out to the public. He's unable to get past the guard at the front, and tries to think of a different way to get the evidence there. Venom realizes Eddie needs to get to the top of the building, and takes over climbing to the top and breaking in through the office window. Eddie leaves the phone with the photos. Venom tells him to jump through the window to leave but Eddie opts for the elevator.

They reach the first floor where a swat team is waiting for him. He puts his hands up and tells them not to shoot, but they don't listen so he tells Venom to take over. Venom fights the swat team, and is about to eat one, but Eddie takes over just in time telling them that they can't eat cops. Ann arrives and see's Venom transform back into Eddie and forces him back to the hospital. Ann's boyfriend Dan explains that the parasite inside him is killing him, but Venom insists to Eddie that they can fix him. Ann turns on the MRI and removes Venom from Eddie. Eddie becomes angry at Venom once his head is clear, and leaves the hospital only to be captured by Drake's men.

Drake confronts Eddie on where Venom is but Eddie won't talk, prompting Drake's own symbiote, Riot, to try and get some answers. Drake orders his men to get rid of Eddie and they take him out to the woods. Eddie see's some of the men disappear in the process and smiles knowing that it's Venom. Venom eats the head off the last of the men, revealing that they bonded with Ann to get there. Venom

then grabs Eddie and kisses him to bond with him again. Venom make Eddie leave Ann behind to go stop Riot, who wants to bring more symbiote's to earth so that they can take over. Eddie asks why Venom would betray his species and help earth, and Venom tells Eddie that he was the one that changed their mind.

They get to the ship and are able to stop Riot, but Venom burns up in the process. The next day Eddie and Ann talk, and Eddie accidentally slips talking to Venom in his head, making Ann suspicious. He leaves and talks to Venom telling them that they can't eat every person they see. Venom asks which people they can eat, and Eddie explains the difference between good and bad people, and they can only eat the bad people. Venom wants to know the difference, and Eddie says he'll explain. They walk in to Mrs. Chen's and start shopping when a man with a gun comes in and threatens her. Venom asks if he's a bad guy, and Eddie confirms so. Venom takes over and threatens the man, who asks in fear who they are. Venom removes half of their face, and they and Eddie simultaneously say, "We are Venom." before eating the man. Eddie takes over again and tells Mrs. Chen that he has a parasite as a way to explain Venom, and leaves. Venom is offended at Eddie calling them a parasite and demands he apologize. Eddie says it's affectionate nickname, but still apologizes. He asks what they should do next, and Venom see's that they can do whatever they want.

Venom found that they were with their sixth child, but didn't tell Eddie. It isn't until their captured by the Symbiote Recon Task Force that Eddie finds out that Venom's about to have a baby. After a long tiring delivery, Sleeper is born. Worried that being bonded so young would cause Sleeper to become a killer like their siblings, the two opted to leave the baby in the care of Alchemex, visiting the often.

Sleeper was later taken hostage by Venom's first host, Tel-Kar, and threatened to corrupt it unless Venom returned to him, which he complies. In order to save Venom, Sleeper bonds to Eddie and the two go off to save them. They track him down, and are able to save Venom, Sleeper taking a brain dead Tel-Kar as his new host. Despite Eddie's protests, Sleeper then set out to explore the cosmos.

“I'm coming love. Whoever's got you...they're in for a surprise.”
— Eddie going to save Venom

“We share everything. Thoughts. Feelings. A purpose. It's not human, but it's given me things no girlfriend ever could. I used to live for words. But the Other's shown me how small and useless they really are. We talk to each other with moods and pictures, memories and heartbeats. Some things are the same in any language. Like the one thing I thought I'd never hear.”
— Eddie after Venom leaves; Venom: The Hunger

The ship has been popular among Venom fans for awhile. It began to take off more during the 2018 run of the Venom comic, as well as after the announcement of the film. Those that saw the film felt that the relationship was the best aspect of it. The relationship between Eddie and Venom was hailed by both critics and fans.

Those that ship based around the comics, believe that the two are already in a committed relationship. Often they site the two raising one of Venom's offspring together. More recently there was the canonical statement of Venom's that they love Eddie.

Once the film was released fans were quick to create jokes about their relationship. Many comparing them to the demon possession vine, or how Venom became emotionally attached to Eddie. He got physically attached pretty quickly as well. There's also the contradiction between their two personalities. However more popular are jokes about Venom being a very annoying voice in Eddie's head.

Fan art of the two became extremely popular after the film, and began to overtake the tags on tumblr and twitter. The fan art ranged on content. Some artist would draw the two in more "fluffy" or domestic moments. Such as eating together, or Venom taking care of Eddie. Redrawing the two as popular vines and other memes are also popular. Other artists draw the two in more risque situations. Typically the two kissing and artist each exploring how a physical relationship would be shown between the two. 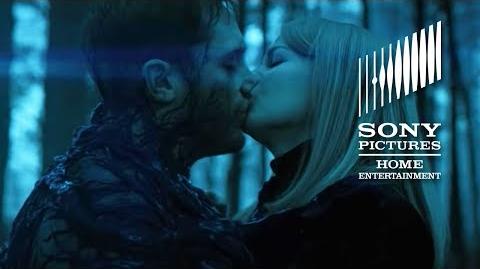 The proof is in the comics

Retrieved from "https://shipping.fandom.com/wiki/Symbrock?oldid=185926"
Community content is available under CC-BY-SA unless otherwise noted.